Types of individual instantiations of LMF can include monolingual, bilingual or multilingual lexical resources. The same specifications are to be used for both small and large lexicons, for both simple and complex lexicons, for both written and spoken lexical representations. The descriptions range from morphology, syntax, computational semantics to computer-assisted translation. The covered languages are not restricted to European languages but cover all natural languages. The range of targeted NLP applications is not restricted. LMF is able to represent most lexicons, including WordNet, EDR and PAROLE lexicons.

In the past, lexicon standardization has been studied and developed by a series of projects like GENELEX, EDR, EAGLES, MULTEXT, PAROLE, SIMPLE and ISLE. Then, the ISO/TC37 National delegations decided to address standards dedicated to NLP and lexicon representation. The work on LMF started in Summer 2003 by a new work item proposal issued by the US delegation. In Fall 2003, the French delegation issued a technical proposition for a data model dedicated to NLP lexicons. In early 2004, the ISO/TC37 committee decided to form a common ISO project with Nicoletta Calzolari (CNR-ILC Italy) as convenor and Gil Francopoulo (Tagmatica France) and Monte George (ANSI USA) as editors. The first step in developing LMF was to design an overall framework based on the general features of existing lexicons and to develop a consistent terminology to describe the components of those lexicons. The next step was the actual design of a comprehensive model that best represented all of the lexicons in detail. A large panel of 60 experts contributed a wide range of requirements for LMF that covered many types of NLP lexicons. The editors of LMF worked closely with the panel of experts to identify the best solutions and reach a consensus on the design of LMF. Special attention was paid to the morphology in order to provide powerful mechanisms for handling problems in several languages that were known as difficult to handle. 13 versions have been written, dispatched (to the National nominated experts), commented and discussed during various ISO technical meetings. After five years of work, including numerous face-to-face meetings and e-mail exchanges, the editors arrived at a coherent UML model. In conclusion, LMF should be considered a synthesis of the state of the art in NLP lexicon field.

The ISO number is 24613. The LMF specification has been published officially as an International Standard on 17 November 2008.

The two level organization forms a coherent family of standards with the following common and simple rules:

The linguistics constants like /feminine/ or /transitive/ are not defined within LMF but are recorded in the Data Category Registry (DCR) that is maintained as a global resource by ISO/TC37 in compliance with ISO/IEC 11179-3:2003.[2] And these constants are used to adorn the high level structural elements.

The LMF specification complies with the modeling principles of Unified Modeling Language (UML) as defined by Object Management Group (OMG). The structure is specified by means of UML class diagrams. The examples are presented by means of UML instance (or object) diagrams.

An XML DTD is given in an annex of the LMF document.

LMF is composed of the following components: 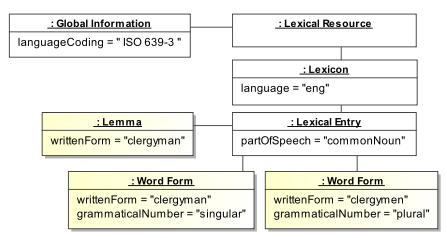 The elements Lexical Resource, Global Information, Lexicon, Lexical Entry, Lemma, and Word Form define the structure of the lexicon. They are specified within the LMF document. On the contrary, languageCoding, language, partOfSpeech, commonNoun, writtenForm, grammaticalNumber, singular, plural are data categories that are taken from the Data Category Registry. These marks adorn the structure. The values ISO 639-3, clergyman, clergymen are plain character strings. The value eng is taken from the list of languages as defined by ISO 639-3.

With some additional information like dtdVersion and feat, the same data can be expressed by the following XML fragment:

This example is rather simple, while LMF can represent much more complex linguistic descriptions the XML tagging is correspondingly complex.

The first publication about the LMF specification as it has been ratified by ISO (this paper became (in 2015) the 9th most cited paper within the Language Resources and Evaluation conferences from LREC papers):

There is a book published in 2013: LMF Lexical Markup Framework[12] which is entirely dedicated to LMF. The first chapter deals with the history of lexicon models, the second chapter is a formal presentation of the data model and the third one deals with the relation with the data categories of the ISO-DCR. The other 14 chapters deal with a lexicon or a system, either in the civil or military domain, either within scientific research labs or for industrial applications. These are Wordnet-LMF, Prolmf, DUELME, UBY-LMF, LG-LMF, RELISH, GlobalAtlas (or Global Atlas) and Wordscape.

Retrieved from "http://en.turkcewiki.org/w/index.php?title=Lexical_Markup_Framework&oldid=994673313"
This website is a mirror of Wikipedia, and is not affiliated with the Wikimedia Foundation.
Categories: