Leslie Marie Osborne (born May 27, 1983) is a retired American soccer defensive midfielder who last played for the Chicago Red Stars in the NWSL in 2013. She is a former member of the United States women's national soccer team and previously played for FC Gold Pride and the Boston Breakers in the WPS. She announced her retirement as a player in March 2014.[2] 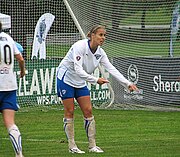 Osborne played soccer at Santa Clara University in Santa Clara, California. As a freshman, she was a key member of the Santa Clara team that won the 2001 NCAA Women's Soccer Championship. As a senior in 2004, she was a semifinalist for the Hermann Trophy and won the Honda Sports Award as the nation's outstanding collegiate female player.[3][4]

In 2009, she played for the FC Gold Pride, in the inaugural season of the Women's Professional Soccer (WPS) league.

In 2010, Osborne was made a free agent and signed with the Boston Breakers.

When the WPS suspended operations in early 2012 and later folded, Osborne continued with the Breakers as they moved into the Women's Premier Soccer League Elite.[5][6] She played a key role in securing investors for the team in both the WPS and WPSL Elite.[7]

In 2013, she joined the Chicago Red Stars in the new National Women's Soccer League.[8]

On March 11, 2014 she announced her retirement from professional soccer.[9]

Osborne was a member of U.S. national youth teams in 2002 and 2003, and earned her first cap with the senior national team on January 30, 2004 against Sweden. After sitting out the first U.S. game of the 2007 FIFA Women's World Cup in favor of Shannon Boxx, she played all 90 minutes in all five remaining matches. During the 4-0 semifinal loss to Brazil, Osborne scored an own goal in an attempt to clear a corner kick.

In May 2008, Osborne tore her ACL before the 2008 Olympics, which caused her to miss the Beijing games. She took nearly a year to rehab the knee injury, causing her to miss several national team games and lose her regular starting position on the national team.

Osborne was an assistant coach for the Santa Clara women's team for several years.

Osborne is married to Ricky Lewis,[10] with whom she has three daughters.[11]

Osborne has a primary sponsorship with German sportswear company, Puma.[7]

Retrieved from "http://en.turkcewiki.org/w/index.php?title=Leslie_Osborne&oldid=1081842906"
This website is a mirror of Wikipedia, and is not affiliated with the Wikimedia Foundation.
Categories:
Hidden categories: