It is the story of the Marquise de Merteuil and the Vicomte de Valmont, two narcissistic rivals (and ex-lovers) who use seduction as a weapon to socially control and exploit others, all the while enjoying their cruel games and boasting about their talent for manipulation. It has been seen as depicting the corruption and depravity of the French nobility shortly before the French Revolution, and thereby attacking the Ancien Régime. The book has also been described as merely a story about two amoral people.

As an epistolary novel, the book is composed of letters written by the various characters to each other. In particular, the letters between Valmont and the Marquise drive the plot, with those of their victims and other characters serving as contrasting figures to give the story its depth.

The Vicomte de Valmont is determined to seduce the virtuous, married, and therefore inaccessible Madame de Tourvel, who is staying with Valmont's aunt while her husband is away on a court case. At the same time, the Marquise de Merteuil is determined to corrupt the young Cécile de Volanges, whose mother has only recently brought her out of a convent to be married—to Merteuil's previous lover, who has rudely discarded her. Cécile falls in love with the Chevalier Danceny (her young music tutor), and Merteuil and Valmont pretend to help the secret lovers in order to gain their trust and manipulate them later to benefit their own schemes. 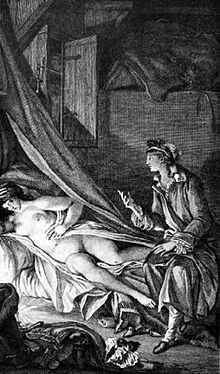 Illustration by Fragonard for Letter XLIV, 1796

Merteuil suggests that the Vicomte should seduce Cécile in order to enact her revenge on Cécile's future husband. Valmont refuses, finding the challenge too easy and preferring to devote himself to seducing Madame de Tourvel. Merteuil promises Valmont that if he seduces Madame de Tourvel and provides her with written proof of seduction, she will spend the night with him. He expects rapid success, but does not find it as easy as his many other conquests. During the course of his pursuit, Valmont discovers that Cécile's mother has written to Madame de Tourvel about his bad reputation. He avenges himself by seducing Cécile as Merteuil had suggested. Meanwhile, Merteuil takes Danceny as her lover.

By the time Valmont has succeeded in seducing Madame de Tourvel, he seems to have fallen in love with her. Jealous, Merteuil tricks him into deserting Madame de Tourvel—and reneges on her promise of spending the night with him. In retaliation, Valmont reveals that he prompted Danceny to reunite with Cécile, leaving Merteuil abandoned yet again. Merteuil declares war on Valmont and reveals to Danceny that Valmont has seduced Cécile.

Danceny and Valmont duel, and Valmont is fatally wounded. Before he dies, he gives Danceny the letters proving Merteuil's own involvement. These letters are sufficient to ruin her reputation so she flees to the countryside, where she contracts smallpox. Her face is left permanently scarred and she is rendered blind in one eye, so she loses her greatest asset: her beauty. But the innocent also suffer from the protagonists’ schemes: desperate with guilt and grief, Madame de Tourvel succumbs to a fever and dies, while Cécile returns to the convent, dishonoured.

Les Liaisons dangereuses is celebrated for its exploration of seduction, revenge and malice, presented in the form of fictional letters collected and published by a fictional author. The book was viewed as scandalous at the time of its publication, though the real intentions of the author remain unknown. It has been suggested that Laclos's intention was the same as that of his fictional author in the novel; to write a morality tale about the French nobility of the Ancien Régime. The theory has been questioned on several grounds; Laclos enjoyed the patronage of France's most senior aristocrat—Louis Philippe II, Duke of Orléans. All the characters in the story are aristocrats, including the virtuous ones like Madame de Tourvel and Madame de Rosemonde and many royalist and conservative figures enjoyed the book, including Queen Marie Antoinette, which suggests that—despite its scandalous reputation—it was not viewed as a political work until the French Revolution made it appear as such, with the benefit of hindsight.

Wayland Young notes that most critics have viewed the work as

... a sort of celebration, or at least a neutral statement, of libertinism... pernicious and damnable... Almost everyone who has written about it has noted how perfunctory are the wages of sin..."[1]

... the mere analysis of libertinism… carried out by a novelist with such a prodigious command of his medium... was enough to condemn it and play a large part in its destruction.[1]

In a well-known essay on Les Liaisons dangereuses, which has often been used as a preface to French editions of the novel, André Malraux argues that, despite its debt to the libertine tradition, Les Liaisons dangereuses is more significant as the introduction of a new kind of character in French fiction. Malraux writes that the Marquise de Merteuil and the Vicomte de Valmont are creations "without precedent"; they are "the first [in European literature] whose acts are determined by an ideology".[2]

Les Liaisons dangereuses is a literary counter-thesis to the epistolary novel as exemplified by Richardson's Pamela; or, Virtue Rewarded. Whereas Richardson uses the technique of letters to provide the reader with a feeling of knowing the protagonist's true and intimate thoughts, Laclos' use of this literary device is the opposite: by presenting the reader with grossly conflicting views from the same writer when addressing different recipients, it is left to the reader to reconcile story, intentions and characters behind the letters. The use of duplicitous characters with one virtuous face can be viewed as a complex criticism of the immensely popular naïve moral epistolary novel.

The novel has been adapted into various media, under many different names.

Retrieved from "http://en.turkcewiki.org/w/index.php?title=Les_Liaisons_dangereuses&oldid=1036208936"
This website is a mirror of Wikipedia, and is not affiliated with the Wikimedia Foundation.
Categories:
Hidden categories: