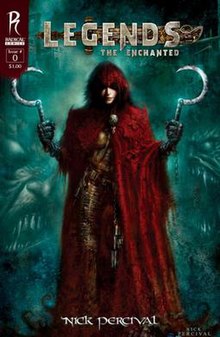 Cover of the book

Legends: The Enchanted is a stand-alone comic book and graphic novel written and illustrated by Nick Percival published by Radical Comics in June 2010.[1] The series takes inspiration from the characters of traditional folklore and fairytales.

Legends: The Enchanted won the HorrorNews Net award for Best Original Graphic Novel 2010[2] and was nominated for an Eagle Award for Favourite Single Story 2010.[3]

On June 17, 2010, it was announced that Brian Grazer and Ron Howard would be bringing Legends to the big screen.[4]

Retrieved from "http://en.turkcewiki.org/w/index.php?title=Legends:_The_Enchanted&oldid=910753302"
This website is a mirror of Wikipedia, and is not affiliated with the Wikimedia Foundation.
Categories:
Hidden categories: