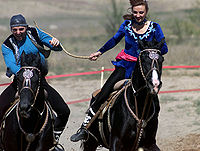 Riders in traditional Kazakh dress play Kyz kuar.[1] In the depiction, the young woman is "winning" by whipping the young man.

Retrieved from "http://en.turkcewiki.org/w/index.php?title=Kyz_kuu&oldid=1057467612"
This website is a mirror of Wikipedia, and is not affiliated with the Wikimedia Foundation.
Categories:
Hidden categories: