Kentucky Horse Park is a working horse farm, international equestrian competition venue, and an educational theme park opened in 1978 in Lexington, Kentucky. It is located off Kentucky State Highway 1973 (Iron Works Pike) and Interstate 75, at Exit 120, in northern Fayette County in the United States. The equestrian facility is a 1,224-acre (4.95 km2) park dedicated to "man's relationship with the horse." Open to the public, the park has a twice daily Horses of the World Show, showcasing both common and rare horses from around the globe. The horses are ridden in authentic costume. Each year the park is host to a number of special events and horse shows.

Additionally, the park contains the International Museum of the Horse,[1] a Smithsonian Affiliate, which has a permanent collection of horse history and memorabilia, along with a rotating historical collection focused on a particular theme. Past themes include A Gift from the Desert (Arabia), Imperial China, and All the Queen's Horses (Britain).

Beginning with the 1979 arrival of Forego, one of the leading handicap horses of the 1970s, the Kentucky Horse Park has been home to some of the world's greatest competition horses, including John Henry, Horse of the Decade for the 1980s and the top money-winning Thoroughbred gelding in racing history. With the exception of a few months in 1986, John Henry lived at the park from 1985 until his death in 2007, alongside other racing greats such as Forego and his fellow 1970s champion Bold Forbes, and more recent residents Cigar, voted Horse of the Decade for the 1990s, and Da Hoss, the first horse to win Breeders' Cup races in non-consecutive years. In late 2008, the champions Alysheba and Funny Cide became residents, but Alysheba died at the park in March 2009. 1994 Kentucky Derby winner, Go For Gin, became a resident of the barn in 2011, while Cigar died at the park in 2014. 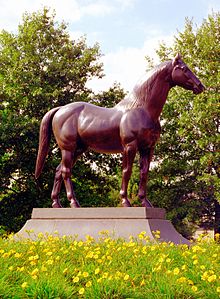 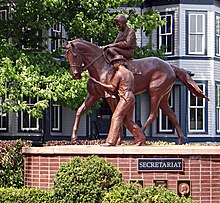 Secretariat, winner of the Triple Crown in 1973.

A number of horse sculptures stand in the Kentucky Horse Park, including a Man o' War statue on a pedestal near the entrance, over the horse's grave, which was moved here from Faraway Farm during the establishment of the park in the 1970s. There is also a life-size statue of the 1973 U.S. Triple Crown winner Secretariat with jockey Ron Turcotte aboard being led by groom Eddie Sweat, sculpted by Jim Reno. From harness racing, there is a statue of Bret Hanover.

The Kentucky Horse Park also contains the National Horse Center, headquarters for more than 30 national, regional and state equine organizations and associations including:

For a list of all 30+ organizations in one place, with contacts, see the Kentucky Horse Park website.[2]

Rolex Stadium is the primary outdoor event venue in the complex. The stadium seats 7,338 in its main grandstand but can accommodate up to 37,338 total capacity when bleachers seating up to 30,000 are used, primarily for larger outdoor horse shows, concerts, and other sporting events. Its show ring measures 306 feet by 406 feet, with the flooring made of sand and fiber; however, artificial turf has been brought into the stadium for soccer and football games on occasion, among other events. It is the largest outdoor concert venue in Central Kentucky with a capacity of up to nearly 52,000. There are six concession stands at the stadium and six restrooms, meaning that concession and restroom facilities may be limited for events that require larger capacity; however Rolex Stadium features an 18-by-33-foot Daktronics ProStar LED videoscreen.

Alltech Arena is Kentucky Horse Park's 5,520-seat indoor arena, expandable to 8,500 for concerts. The arena floor and championship ring measures 135 feet by 300 feet; in addition in indoor horse shows, Alltech Arena can also be used for indoor football, ice hockey, basketball, circuses, boxing, wrestling, concerts, and other special events. The arena contains nine luxury suites, 222 VIP box seats and a 4,000-square-foot club lounge seating up to 80 patrons. The arena floor is below street level; the arena concourse, with 50,000 square feet of space, overlooks the arena floor and contains six concession stands. There are also two box offices at the arena.

The Kentucky Horse Park hosts diverse educational events and competitions. Past examples include:

Also, in 2015 the park became the new home of the Ichthus Music Festival, a major Christian music festival originally held in nearby Wilmore until its temporary demise following its 2012 edition.

On December 6, 2005, it was announced that Lexington and the Kentucky Horse Park would host the 2010 FEI World Equestrian Games in September and October. The 2010 games marked the first time the games were held outside of Europe; additionally, the eight Olympic-level world championships had never been held together in a single location within Europe.

As part of the games, several improvements to the park were slated:

On February 1, 2007, Governor Ernie Fletcher announced that he would seek an additional $38.3 million in improvements to the park in preparation for the games and other major horse events.[4] In his address to the 2007 General Assembly the governor suggested:

The new indoor stadium and additional exhibition space, costing $28 million, would be financed with 20-year bonds.[4] The roadway improvements, at $10.3 million within the park, would come from the state highway fund. The resort hotel would be constructed and financed without state funds.

Although the park is owned by the state government, it is administered separately from the state park system.

Retrieved from "http://en.turkcewiki.org/w/index.php?title=Kentucky_Horse_Park&oldid=1026552439"
This website is a mirror of Wikipedia, and is not affiliated with the Wikimedia Foundation.
Categories:
Hidden categories: