Kannada cinema, also known as Sandalwood, Kannada Film Industry or Chandanavana,[3] is the segment of Indian cinema[4] dedicated to the production of motion pictures in the Kannada language widely spoken in the state of Karnataka.[5][6][7] The 1934 film Sati Sulochana directed by Y. V. Rao was the first talkie film in the Kannada language.[8][9][10] It was also the first film starring Subbaiah Naidu and Tripuramba, and was the first motion picture screened in the erstwhile Mysore Kingdom.[11] The film was produced by Chamanlal Doongaji, who in 1932 founded South India Movietone in Bangalore.[12][13]

Major literary works have been adapted to the Kannada screen such as B. V. Karanth's Chomana Dudi (1975), Girish Karnad's Kaadu (1973), Pattabhirama Reddy's Samskara (1970) (based on a novel by U. R. Ananthamurthy), which won the Bronze Leopard at Locarno International Film Festival,[14] and T. S. Nagabharana's Mysuru Mallige (based on the works of acclaimed poet K. S. Narasimhaswamy).[15] 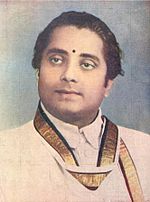 In 1934, the first Kannada talkie, Sati Sulochana,[22] appeared in theatres, followed by Bhakta Dhruva (aka Dhruva Kumar). Sati Sulochana, starring Subbaiah Naidu and Tripuramba in lead roles, was shot in Kolhapur at the Chatrapathi studio; most filming, sound recording, and post-production was done in Chennai.[23]

In 1949, Honnappa Bhagavathar, who had earlier acted in Gubbi Veeranna's films, produced Bhakta Kumbara and starred in the lead role along with Pandaribai. In 1955, Bhagavathar again produced a Kannada film, Mahakavi Kalidasa, in which he introduced actress B. Saroja Devi.[23] B. S. Ranga was an Indian photographer, actor, writer, producer and director made many landmark movies in Kannada, under Vikram Studios.[24]

Matinee idol, Rajkumar entered Kannada cinema after his long stint as a dramatist with Gubbi Veeranna's Gubbi Drama Company, which he joined at the age of eight, before he got his first break as a lead in the 1954 film Bedara Kannappa.[25]

Method actor Shankar Nag received the inaugural IFFI Best Actor Award (Male): Silver Peacock Award" at the 7th International Film Festival of India for his work in the film Ondanondu Kaladalli.[26] He is the younger brother of actor Anant Nag.[27][28] M. V. Vasudeva Rao, the first Kannada actor to win National Film Award for Best Actor, was starred in over 200 films in his career; however, post Chomana Dudi, he only played minor roles.[29]

Vishnuvardhan entered Kannada cinema with the National Award-winning movie Vamshavruksha (1972) directed by Girish Karnad based on the novel written by S. L. Bhyrappa. His first lead role was in Naagarahaavu, directed by Puttanna Kanagal and based on a novel by T. R. Subba Rao. It was the first in Kannada film history to complete 100 days in three main theatres of Bangalore. In his 37-year career, he has played a variety of roles in more than 200 films.[30]

With his debut in Puttanna Kanagal's National Award-winning Kannada film Naagarahaavu (1972), Ambareesh's acting career commenced with a brief phase of portraying antagonistic and supporting characters. After establishing himself as a lead actor portraying rebellious characters on screen in a number of commercially successful films, he earned the moniker "rebel star".[31] He also earned the nickname Mandyada Gandu (English: Man of Mandya)[32]

B. Saroja Devi is One of the most successful female leads in the history of Indian cinema, she acted in around 200 films in over six decades.[33][34] She is known by the epithets "Abinaya Saraswathi" (Saraswati of acting) in Kannada and "Kannadathu Paingili" (Kannada's Parrot) in Tamil.[34]

Kannada Cinema majorly contributed to the Parallel Cinema movement of India.[35] Directors like Girish Kasaravalli,[35] Girish Karnad,[36] G. V. Iyer[36] were the early names to join the movement. T. S. Nagabharana[37] and BV Karanth were also popular names in the movement. Puttanna Kanagal's films were however considered a bridge between Mainstream and Parallel Cinema.

Prakash Raj began his acting career with Doordarshan serials such as Bisilu Kudure (Kannada) and Guddada Bhootha (Tulu and Kannada).[38] He later took up supporting roles in Kannada films such as Ramachari, Ranadheera, Nishkarsha and Lockup Death. He was known for his dialogue delivery and histrionics. His breakthrough role came in Harakeya Kuri, directed by K. S. L. Swamy starring Vishnuvardhan, with whom he had acted in other films such as Mithileya Seetheyaru, Muthina Haara and Nishkarsha. Prakash re-entered Kannada films through Nagamandala in 1997, directed by T. S. Nagabharana.[39] Veteran Kannada actor Shakti Prasad's son Arjun Sarja is known for his work in South Indian cinema.[40] He starred in movies such as Prasad; the film was screened at the Berlin Film Festival and Arjun received the Karnataka State Award for his performance in it.[41]

Sanchari Vijay's portrayal of a transgender won him the National Best Actor Award.[42][43][44] With the award, Vijay became the third actor after M. V. Vasudeva Rao, and Charuhasan to win the National Award for Best Actor for a performance in a Kannada film.[45]

Shiva Rajkumar is known for his work in Janumada Jodi, Anand, Ratha Sapthami, Nammoora Mandara Hoove, Om, Simhada Mari and Chigurida Kanasu. He acted in Sugreeva, which was shot in 18 hours. His Om, directed by Upendra, set a trend of gangster movies in Kannada and other film industries in India. It continues to be shown even to this day.[46]

Rockline Venkatesh founded Rockline Entertainments which has produced over twenty five films as of 2012.[47] New age actors - Yash, Darshan, Puneeth Rajkumar, Rakshith Shetty and Sudeep are some of the highest paid actors in Sandalwood.[48][49][50] The Rakshith Shetty starrer Kirik Party went on to become one of the highest-grossing Kannada films by collecting ₹ 50 crores[51] against a production budget ₹ 4 crores[52] and completed 150 days in the main cities of Karnataka.[53]

Composer Hamsalekha is usually referred to by the title Naadha Brahma (English: The Brahma of Music) who is considered to be the major cause for the change in the music composing and lyric writing style which would appeal much to the younger generation. He integrated folk and introduced western musical sensibilities into the Kannada cinema.[56][57]

Mano Murthy scored the blockbuster film Mungaru Male starring Ganesh and Pooja Gandhi. Upon the album's release, it topped the charts with the song "Anisuthide" receiving significant radio and TV air time.[58] The album emerged as a massive success topping every Kannada music chart. It was reported that by mid-May 2007, over 200,000 copies were sold in compact discs.[59]

The 1964 movie Naandi set a landmark by being the first ever Kannada film to be screened at an international film festival.[60][61][62][63] This film was screened at IFFI 1992 Kannada cinema Retrospect.[64]

The 1970 movie Samskara won the Bronze Leopard at Locarno International Film Festival [65] The 1977 movie Ghatashraddha became the only Indian film to be chosen by the National Archive of Paris among 100 others, during the centenary celebrations of cinema.[66][67] At the 2009 International Film Festival of India, it was announced one of the 20 best films in Indian cinema, having received 1.6 million votes.[68][69] The 1978 movie Ondanondu Kaladalli was released at The Guild Theatre, 50 Rockefeller Plaza on 17 May 1982. Vincent Canby, the chief film critic of The New York Times, called the movie "that is both exotic as well as surprising in view of all the bodies on the ground at the end, sweet natured!".[70] The film was subtitled into English for its American premiere on 18 October 1995 in Shriver Hall at the Johns Hopkins University as part of the 1995 Milton S. Eisenhower Symposium "Framing Society : A Century of Cinema".[71]

The first government institute in India to start technical courses related to films was established in 1941 named as occupational institute then called the Sri Jayachamarajendra (S J) Polytechnic in Bangalore. In September 1996, two specialized courses, Cinematography and Sound & Television were separated and the Government Film and Television Institute was started at Hesaraghatta, under the World Bank Assisted Project for Technician Development in India.[104]

Retrieved from "http://en.turkcewiki.org/w/index.php?title=Kannada_cinema&oldid=1036395587"
This website is a mirror of Wikipedia, and is not affiliated with the Wikimedia Foundation.
Categories:
Hidden categories: