Jump to navigation Jump to search
Group of fictional characters of DC Comics
For other uses, see Justice League (disambiguation).

The Justice League is a team of superheroes in American comic books published by DC Comics. The team first appeared in The Brave and the Bold #28 (March 1960). The team was conceived by writer Gardner Fox as a revival of the Justice Society of America, a similar team from DC Comics from the 1940s which had been pulled out of print due to a decline in sales.

The Justice League is an all-star ensemble cast of established superhero characters from DC Comics' portfolio. Diegetically, these superheroes usually operate independently but occasionally assemble as a team to tackle especially formidable villains. This in contrast to certain other superhero teams such as the X-Men, whose characters were created specifically to be part of the team, with the team being central to their identity. The cast of the Justice League usually features a few highly popular characters who have their own solo books, such as Superman, alongside a number of lesser-known characters who benefit from exposure, such as Cyborg.[1] The Justice League was created to boost the profiles and sales of said characters through cross-promotion and helped develop the DC Universe as a shared universe, as it is through teams like the Justice League that the setting's characters regularly interact with each other.[2]

Beyond comic books, the Justice League has been adapted to a number of television shows, movies, and video games.

The members of the Justice League are heroes who normally operate independently but who occasionally team up to tackle especially formidable villains. This is in contrast to teams such as the X-Men or the Fantastic Four, who normally operate as a team and for whom the team is central to their identity.

Most versions of the Justice League feature a select cast of highly popular characters from the DC Comics portfolio, such as Superman and Batman, to attract readers with their star power; and they often co-feature a few lesser-known characters who benefit from exposure, such as Cyborg or Black Canary. DC Comics has in several periods deviated from this formula, most notably in the late 1980s and early 1990s with books such as Justice League International, which deliberately featured a cast of lesser-known characters. The advantage of this was that lesser-known characters are not burdened by convoluted continuities, which gives writers more creative flexibility to write character-driven stories. This was done to emulate the model of Marvel Comics' X-Men books, whose stories were more character-driven and which favored more obscure or even new characters.

The Justice League is an independent group, although it usually accepts some constraints from the US government or the United Nations so as to receive their sanction. Particularly in the early decades of publication, DC Comics was keen for its superheroes to be perceived as law-abiding because children were the main audience. The cast is rarely more than a dozen people in size so as to give a reasonable and equal time for each character. While sometimes the League is shown to have a designated chairperson or leader, there is otherwise generally no formal hierarchy within the team; they are a small band of equals who make major decisions, such as inducting new members, by vote.

The Legion of Doom was created for the Challenge of the Super Friends animated TV series as a villainous counterpart to the Justice League. In that original incarnation, it consisted of established villains associated with each of the Justice League's members, e.g. Lex Luthor for Superman, Gorilla Grodd for the Flash, and Cheetah for Wonder Woman. The Legion of Doom, or some variant of it, has since appeared in other TV shows and comic books. 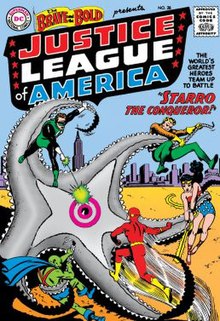 The Brave and the Bold #28, their first appearance. Superman and Batman do not appear on the cover but do appear in the story within.

In its inception, the Justice League was a revival of the Justice Society of America, created by editor Sheldon Mayer and writer Gardner Fox in 1940. After World War 2, superheroes fell out of popularity, which led to the cancellation of many characters, including the Justice Society, which last appeared in All-Star Comics #57 (1951). A few years later, sales rose again, and DC Comics revived some of these retired characters, reinventing a few of them in the process. Editor Julius Schwartz asked writer Gardner Fox to reintroduce the Justice Society of America. Schwartz decided to rename it the "Justice League of America" because he felt "League" would appeal better to young readers, evoking sports organizations such as the National League.[3] The Justice League of America debuted in The Brave and the Bold #28 (March 1960), and after two further appearances in that title, got its own series, which quickly became one of the company's best-selling titles.[4] This led DC Comics to create a bunch of other superhero teams, such as the Teen Titans. Marvel Comics, a rival comic book publisher, noticed the Justice League's success and created the Avengers and the Fantastic Four.

The initial Justice League lineup included seven of DC Comics' superheroes who were regularly published at that time: Superman, Batman, Aquaman, Flash, Green Lantern, Martian Manhunter, and Wonder Woman. Green Arrow, the Atom and Hawkman were added to the team over the next four years.

In the Justice Society stories from the 1940s (in All-Star Comics), the Justice Society was used more as a framing device for its members' solo adventures. The stories tended to have the following plot structure: the Justice Society meets to discuss some new menace, they split up to undertake individual missions that somehow connect to said menace, and finally regroup for the showdown with the main villain. In the 1940s, most comic books were anthologies, and All-Star Comics was in practice not a major deviation from that format. By contrast, the Justice League worked more closely as a team in their stories from the 1960s, thereby having a stronger identity as a team.

In another change from the Justice Society stories of the 1940s, Batman and Superman were now regular members of the cast, not mere "honorary members" who made occasional cameos.

Justice League of America #21 (1963) featured the first crossover story in which the Justice League meets and teams up with the Justice Society of America. In doing so, DC Comics brought back a number of legacy characters such as Doctor Fate and Black Canary. The issue was a hit with readers and such crossovers became a recurring event.

From the Justice League's inception in 1960 up until 1984, the team's roster always included a number of A-list characters to draw in readers, such as Green Lantern and Superman. But in Justice League of America Annual #2 (1984), the Justice League was revised to entirely comprise more obscure characters, such as Vixen, Vibe, and Martian Manhunter. The original A-list members would not be brought back into the cast until 1996. The motives behind this change were to dispense with the convoluted continuities of the classic characters by using lesser-known and new characters, thus giving the writers more flexibility to write character-driven stories; and to give the team a more youthful, hipper feel similar to that of the Teen Titans and the X-Men, which were selling better.[5] The cast was multicultural: Gypsy was Romani[a], Vibe was Latino, Vixen was Black. However, the writing of Vibe and Gypsy was criticized for using clichés of their ethnic groups, symptomatic of writers who were well-meaning but out of touch with certain minorities, something for which said writers (Gerry Conway and Chuck Patton) later expressed regret.[6][7][8] This era of the Justice League, which lasted about two years, is popularly known as "Justice League Detroit" because they were headquartered in Detroit.

The Justice League International featured characters that had previously not been part of the DC Universe, which had been absorbed from the portfolios of other publishers that DC Comics had purchased. These included Captain Atom and Blue Beetle, which were created for Charlton Comics in the 1960s. In 1983, DC Comics purchased Charlton Comics and, a few years later, integrated Blue Beetle and Captain Atom into the DC Universe. Captain Marvel, originally from the Fawcett Comics universe, was similarly integrated.

The cancellation of the aforementioned spin-off books prompted DC to revamp the League as a single team in a single title. A new Justice League of America was launched in September 1996 limited series Justice League: A Midsummer's Nightmare by Mark Waid and Fabian Nicieza, which returned to the classic cast of the 1960s. In 1997, DC Comics launched a new book titled JLA. Grant Morrison wrote JLA for the first four years, and he gave the book an epic feel by making the Justice League an allegory for a pantheon of gods, and in their stories they regularly fought villains who threatened the entire world or even the entire cosmos.[9] JLA was cancelled in 2006.

The Justice League has on a few occasions appeared in crossover stories with superhero characters from rival publishers such as Marvel Comics and Dark Horse Comics. In general, such inter-company crossovers are rare because a lot of resources must be spent in sorting out the legal issues and corporate politics of the two companies, which reduces their profitability.

The last crossover between DC Comics and Marvel Comics was JLA/Avengers, which they jointly published in 2003. Now that Marvel Comics and DC Comics are part of major multimedia corporations (Disney and Warner Brothers respectively), those aforementioned hurdles are even more complicated, which makes another project like JLA/Avengers much less likely.[10] In 2017, Dan Didio remarked that DC Comics and Marvel are very competitive towards each other and only did crossovers when their sales were low.[11] However, DC Comics did go on to feature the Justice League in crossovers with smaller companies such as Dark Horse Comics, such as a crossover with Black Hammer in 2019.

The Justice League and its members appear in various live-action media in the DC Extended Universe (DCEU) media franchise:

Most of the characters that appear in DC Comics' books are set in the same fictional universe, known as the DC Universe. They occasionally make guest appearances in each other's solo books, and more regularly in team books such as Justice League. Such crossovers encouraged readers to buy other books in DC Comics' catalogue, and readers became engrossed not just in the individual characters but in their web of relationships across the broader setting, thereby building brand loyalty. Marvel Comics copied this idea by creating a number of superhero teams of its own, the closest analogue being the Avengers, so as to promote and develop the Marvel Universe. Many readers devoted themselves to just one of these two comic book universes. Thus the superhero fan community developed sub-communities of DC and Marvel devotees.[2]

Justice League: Alien Invasion is an interactive dark ride at Warner Bros. Movie World on the Gold Coast, Australia. In the ride, guests board vehicles equipped with blasters as they join the Justice League in the fight against Starro, who has mind-controlled the citizens of Metropolis.

Justice League: Battle for Metropolis is an interactive dark ride at seven Six Flags parks across the United States and Mexico. In the ride, Lex Luthor and the Joker have captured Supergirl, Wonder Woman, Green Lantern, and Flash, and it is up to the combined forces of the remaining members of the Justice League and the Justice League Reserve Team to save them from their capture at LexCorp. Guests board motion-enhanced and stun blaster-equipped vehicles designed by A.R.G.U.S. as they ride through Metropolis and join the fight against the henchmen of Lex Luthor and the Joker.

Retrieved from "http://en.turkcewiki.org/w/index.php?title=Justice_League&oldid=1066512672"
This website is a mirror of Wikipedia, and is not affiliated with the Wikimedia Foundation.
Categories:
Hidden categories: