The New Hope River Valley, now home to the corporate world of Research Triangle Park, has been the site of a broad range of cultures for more than 10,000 years. Archaeologists have explored the remains of 450 prehistoric and historic sites in the area and have uncovered many Native American artifacts. The land was settled by Scottish Highlanders in the 1740s, and it saw action in both the Revolutionary and Civil wars.

Following a disastrous hurricane, which struck the Cape Fear River Basin in 1945, Congress directed the U.S. Army Corps of Engineers to undertake a comprehensive study of water resource needs in the area. The project, then known as New Hope Lake, was authorized in 1963 and construction began in 1967. In 1973, the name of the project was changed to B. Everett Jordan Dam and Lake in honor of the former senator from North Carolina.

Jordan Lake Park's 46,768 acres (189 km2) are not only a popular source of recreation, they also provide the water supply for surrounding cities, flood and water quality control, and fish and wildlife conservation.[2] 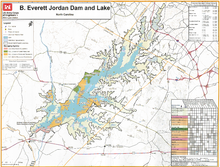 Events held at the park include monthly skywatching sessions offered by park rangers, the Morehead Planetarium and Science Center in nearby Chapel Hill, and volunteer amateur astronomers from the Chapel Hill Astronomical and Observing Society at the Ebenezer Church Recreation Area in the park.[4]

Retrieved from "http://en.turkcewiki.org/w/index.php?title=Jordan_Lake_State_Recreation_Area&oldid=1085868048"
This website is a mirror of Wikipedia, and is not affiliated with the Wikimedia Foundation.
Categories:
Hidden categories: