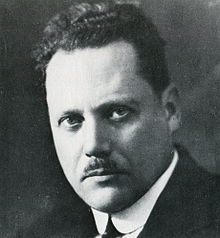 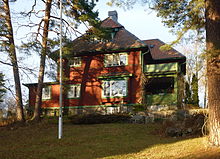 Jonas Hesselman (9 April 1877- 20 December 1957) was a Swedish engineer. He built the first spark ignition engine with direct injection of fuel into the cylinder.[1]

Knut Jonas Elias Hesselman was born at Å församling in Östergötland, Sweden. He was the son of factory owner Bror August Hesselman and Marie Louise Hesselman, née Åberg. He was the brother of professor Henrik Hesselman (1874–1943) and linguist Bengt Hesselman (1875–1952). [2] [3][4]

Hesselman graduated in 1899 from KTH Royal Institute of Technology, Department of Mechanics. He worked from 1899 to 1916 for AB Diesel Engines (later Atlas Diesel, now Atlas Copco) in Sickla in Nacka just outside Stockholm, from 1901 as Head of Construction. Here he also developed Rudolf Diesel's engine further and won international recognition as an authority on diesel engines. In 1916 he opened his own factory and in 1925 presented the Hesselman engine, a hybrid between an Otto engine and diesel engine. [5]

Jonas Hesselman was a resident of "Villa Hesselman" at Storängen outside Stockholm. The villa was designed in 1906 by architect Albin Brag (1878-1937). He lived here until his death in 1957.

Retrieved from "http://en.turkcewiki.org/w/index.php?title=Jonas_Hesselman&oldid=1029199335"
This website is a mirror of Wikipedia, and is not affiliated with the Wikimedia Foundation.
Categories:
Hidden categories: