Jump to navigation Jump to search
Atmospheric model
Not to be confused with Standard conditions for temperature and pressure. 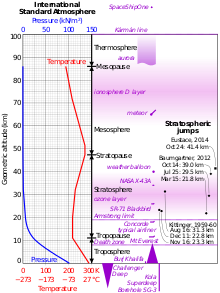 The International Standard Atmosphere (ISA) is a static atmospheric model of how the pressure, temperature, density, and viscosity of the Earth's atmosphere change over a wide range of altitudes or elevations. It has been established to provide a common reference for temperature and pressure and consists of tables of values at various altitudes, plus some formulas by which those values were derived. The International Organization for Standardization (ISO) publishes the ISA as an international standard, ISO 2533:1975.[1] Other standards organizations, such as the International Civil Aviation Organization (ICAO) and the United States Government, publish extensions or subsets of the same atmospheric model under their own standards-making authority.

The ISA mathematical model divides the atmosphere into layers with an assumed linear distribution of absolute temperature T against geopotential altitude h.[2] The other two values (pressure P and density ρ) are computed by simultaneously solving the equations resulting from:

at each geopotential altitude, where g is the standard acceleration of gravity, and Rspecific is the specific gas constant for dry air.

The ISA model is based on average conditions at mid latitudes, as determined by the ISO's TC 20/SC 6 technical committee. It has been revised from time to time since the middle of the 20th century.

Use at non-standard day conditions[edit]

The ISA models a hypothetical standard day to allow a reproducible engineering reference for calculation and testing of engine and vehicle performance at various altitudes. It does not provide a rigorous meteorological model of actual atmospheric conditions (for example, changes in barometric pressure due to wind conditions). Neither does it account for humidity effects; air is assumed to be dry and clean and of constant composition. Humidity effects are accounted for in vehicle or engine analysis by adding water vapor to the thermodynamic state of the air after obtaining the pressure and density from the standard atmosphere model.

Non-standard (hot or cold) days are modeled by adding a specified temperature delta to the standard temperature at altitude, but pressure is taken as the standard day value. Density and viscosity are recalculated at the resultant temperature and pressure using the ideal gas equation of state. Hot day, Cold day, Tropical, and Polar temperature profiles with altitude have been defined for use as performance references, such as United States Department of Defense MIL-STD-210C, and its successor MIL-HDBK-310.[6]

The International Civil Aviation Organization (ICAO) published their "ICAO Standard Atmosphere" as Doc 7488-CD in 1993. It has the same model as the ISA, but extends the altitude coverage to 80 kilometers (262,500 feet).[7]

The ICAO Standard Atmosphere, like the ISA, does not contain water vapor.

Some of the values defined by ICAO are:

NRLMSISE-00 is a newer model of the Earth's atmosphere from ground to space, developed by the US Naval Research Laboratory taking actual satellite drag data into account. A primary use of this model is to aid predictions of satellite orbital decay due to atmospheric drag. The COSPAR International Reference Atmosphere (CIRA) 2012 and the ISO 14222 Earth Atmosphere Density standard both recommend NRLMSISE-00 for composition uses.

JB2008 is a newer model of the Earth’s atmosphere from 120 to 2000 km, developed by the US Air Force Space Command and Space Environment Technologies taking into account realistic solar irradiances and time evolution of geomagnetic storms. It is most useful for calculating satellite orbital decay due to atmospheric drag. The COSPAR International Reference Atmosphere (CIRA) 2012 and the ISO 14222 Earth Atmosphere Density standard both recommend JB2008 for mass density in drag uses.

Retrieved from "http://en.turkcewiki.org/w/index.php?title=International_Standard_Atmosphere&oldid=1022554634"
This website is a mirror of Wikipedia, and is not affiliated with the Wikimedia Foundation.
Categories:
Hidden categories: