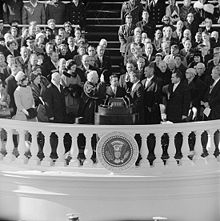 In government and politics, inauguration is the process of swearing a person into office and thus making that person the incumbent. Such an inauguration commonly occurs through a formal ceremony or special event, which may also include an inaugural address by the new official.

The word inauguration stems from the Latin augur, which refers to the rituals of ancient Roman priests seeking to interpret if it was the will of the gods for a public official to be deemed worthy to assume office.[1]

The inaugurations of public figures, especially those of political leaders, often feature lavish ceremonies in which the figure publicly takes their oath of office (sometimes called "swearing in"), often in front of a large crowd of spectators. A monarchical inauguration may take on different forms depending on the nation: they may undergo a coronation rite or may simply be required to take an oath in the presence of a country's legislature.

The "inaugural address" is a speech given during this ceremony which informs the people of their intentions as a leader. A famous inauguration speech is John F. Kennedy's.[2]

Retrieved from "http://en.turkcewiki.org/w/index.php?title=Inauguration&oldid=1085357373"
This website is a mirror of Wikipedia, and is not affiliated with the Wikimedia Foundation.
Categories:
Hidden categories: