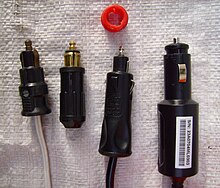 Comparison of (L to R) two Powerlet plugs, one combination plug, and one Cigar Lighter Plug

ISO 4165 is a standard adopted by the International Organization for Standardization (ISO) that describes a double-pole DC connector to supply between 12 and 24 V DC at up to 12 amps to appliances in vehicles. Although roughly similar in design to an automotive accessory receptacle, the ISO 4165 connector is shorter and smaller in diameter. It was originally a standard fitting on all the German military vehicles during World War II.

The body (which remains outside the receptacle) is 20 mm in diameter. The resilient neck must mate with a 12 mm diameter hole. The center pin is 5 mm in diameter.

The ISO 4165:2001[1] DC connector is also known as the BMW Accessory plug, as it is used on BMW motorcycles; as the Powerlet connector, named after a firm that produces them; and, in Australia (where they are popular in mobile power applications, including 4WD and Caravaning), as the Hella plug, or Merit plug.

Retrieved from "http://en.turkcewiki.org/w/index.php?title=ISO_4165&oldid=859813080"
This website is a mirror of Wikipedia, and is not affiliated with the Wikimedia Foundation.
Categories:
Hidden categories: