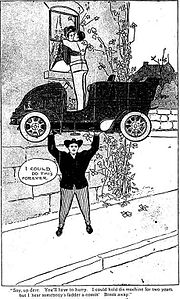 Hugo Hercules is an American weekly comic strip published in the Chicago Tribune, written and drawn by Wilhelm Heinrich Detlev Körner. It ran for five months, from September 7, 1902 to January 11, 1903, totaling seventeen strips.[1] Despite its short run, it's considered the earliest superhero fiction comic.[2]

A good-natured man endowed with superhuman strength, Hugo wandered about town, helping people with their problems and shocking them with his surprising displays of power. He was so strong he could pick up an elephant,[3] kick a house like a football,[4] wield an artillery cannon like a handgun,[5] and lift a locomotive engine off the tracks and pull its cargo behind him at train speeds.[6] Casual about his incredible feats, Hugo often repeated his catchphrase, "Just as easy", shrugging off the adoring crowds.

Sometimes referred to as the first superhero, the strip was not a great success and Körner eventually left comics to become a painter.[7]

Hugo Hercules appears in the 2015 graphic novel Nemo: River of Ghosts, written by Alan Moore and illustrated by Kevin O'Neill.

Retrieved from "http://en.turkcewiki.org/w/index.php?title=Hugo_Hercules&oldid=1098787999"
This website is a mirror of Wikipedia, and is not affiliated with the Wikimedia Foundation.
Categories: