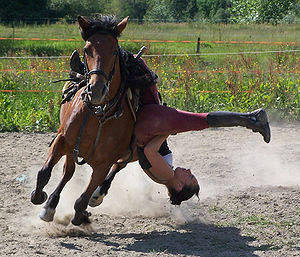 The Cossack Drag or Death Drag. 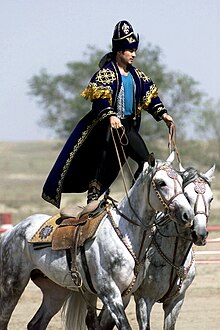 Stunt riding at the King of the Ranges competition day, Murrurundi, NSW

Trick riding refers to the act of performing stunts while riding a horse, such as the rider standing upright on the back of a galloping horse, using a specially designed saddle with a reinforced steel horn, and specialized kossak loops for hands and feet. The horse is likewise galloping free. Trick riding is not to be confused with equestrian vaulting, which is an internationally recognized competitive sport governed by the Federation Equestre Internationale (FEI).

Horse riding stunts have been performed in many films, as well as in equestrian events such as Equitana and the official opening of the Australian Equine and Livestock Events Centre, rodeos, and much more.[1]

This stunt is preformed on the musical theatre production of "The Man from Snowy River: Arena Spectacular". The trick riders for the show included Deborah Brennan and Zelie Bullen (née Thompson) (who has also taken part in other horse shows such as Equitana).

Trick riding has a very interesting story. It has not always been an American entertainment act. It was once used as a weapon for the Russian Cossacks who adopted it from the people of Caucasus and called it dzhigitovka. Cossacks were nearly unconquerable because they could easily hide from their enemies.[citation needed] When communism overtook Russia, some Cossacks were forced to leave the country. Many moved to America, where they used their talents for money. They became part of the entertainment community and soon Americans started catching on. Trick riding even became a rodeo event where the hardest tricks earned the most points. Trick riding as a competitive rodeo event came to an end in the 1940s. Trick riding became more dangerous and the horses became a lot faster as the trick riders became desperate for the prize money. Rodeo producers deemed trick riding too dangerous for competition and trick riding then became a specialty act in rodeos. 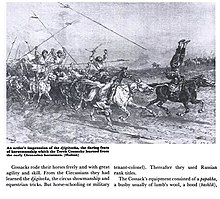 Albert SEATON - The Cossacks published in 1972.

There are many horse riding stunts and many different variations of tricks, with each rider having an individual style. Tricks can be strap tricks or vault type tricks. Some tricks include the forward fender, layout fender (also known as the Indian Hideaway), one foot stand , spritz stand, shoulder stand, back drag, hippodrome, vault, reverse one foot stand, and spin the horn.

One type of trick riding is known as "Roman riding", and is usually performed as entertainment in rodeos, circuses and horse shows. In Roman riding, the rider stands atop a pair of horses, with one foot on each horse.[3][4]

Roman riding is one of the older forms of riding, and was performed during the time of the Roman Empire. As many as five horses, with the rider standing on the inner three, have been ridden and jumped abreast. As many as nine horses, three teams of three abreast, have been ridden and jumped in tandem. Tricks such as trading teams while riding, riding a pony team between the horse team and jumping six- and nine-horse tandems are also performed. Sometimes riders will change teams at the trot, dance, ride backward and twirl a baton, and even jump through fire.

Retrieved from "http://en.turkcewiki.org/w/index.php?title=Trick_riding&oldid=1094395905"
This website is a mirror of Wikipedia, and is not affiliated with the Wikimedia Foundation.
Categories:
Hidden categories: