Horse harness is a device that connects a horse to a vehicle or another type of load.

There are two main categories of horse harness: (1) the "breaststrap" or "breastcollar" design, and (2) the collar and hames design. For light work, such as horse show competition where light carts are used, a harness needs only a breastcollar. It can only be used for lighter hauling, since it places the weight of the load on the sternum of the horse and the nearby windpipe. This is not the heaviest skeletal area; also heavy loads can constrict the windpipe and reduce a horse's air supply.

By contrast, the collar and harness places the weight of the load onto the horse's shoulders, and without any restriction on the air supply. For heavy hauling, the harness must include a horse collar to allow the animal to use its full weight and strength.

Harness components designed for other animals (such as the yoke used with oxen) are not suitable for horses and will not allow the horse to work efficiently.

Putting harness on a horse is called harnessing or harnessing up. Attaching the harness to the load is called putting to (British Isles) or hitching (North America). The order of putting on harness components varies by discipline, but when a horse collar is used, it is usually put on first.

Throughout the ancient world, the 'throat-and-girth' harness was used for harnessing horses that pulled carts; this greatly limited a horse's ability to exert itself as it was constantly choked at the neck.[1] A painting on a lacquerware box from the State of Chu, dated to the 4th century BC, shows the first known use of a yoke placed across a horses's chest, with traces connecting to the chariot shaft.[2] The hard yoke across the horse's chest was gradually replaced by a breast strap, which was often depicted in carved reliefs and stamped bricks of tombs from the Han Dynasty (202 BC – 220 AD).[3] Eventually, the horse collar was invented in China, at least by the 5th century.[4][5] 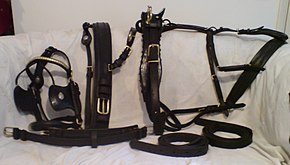 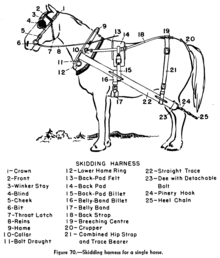 Elements of a skidding harness

Parts of the harness include:[6] 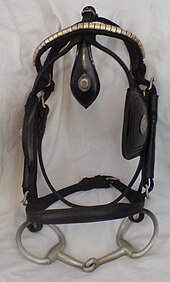 Show harnesses for light cart driving have a breastcollar instead of a horse collar and are made with strong but refined-looking leather throughout, usually black and highly polished. In draft horse showing and combined driving, horse collars are seen, but harness leather is still highly polished and well-finished. 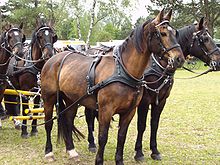 Lighter weight but strong harness similar to show harness, used for pulling passenger vehicles such as buggies or carts, or other lighter loads. The traces attach either to the shafts of the vehicle or to the vehicle itself, and the harness may have either a horse collar or a breastcollar.

The racing harness, like the show harness, is a breastcollar harness. Horses are hitched to a very lightweight two-wheeled cart, called a sulky. Most race harnesses incorporate a standing martingale and an overcheck. Horses may be raced in a "blind" bridle, which restricts the horse from seeing beside and behind him to various degrees by use of blinkers (horse tack), or may be raced with an "open" bridle, one that does not have blinkers. Specialized equipment, called "hobbles" or "hopples" are added to the harness of race horses who pace (and sometimes to the harness of those who trot) in order to help them maintain their gait.[7]

Harness for pulling heavier vehicles always has a horse collar. The traces are often made of chain and attach to loops on the shafts of the vehicle. A chain attached to the shafts may be passed over the saddle to carry their weight.[8] Reins are of rope or leather, depending on region of the world.

Similar to cart harness but without breeching, used for dragged loads such as plows, harrows, canal boats or logs. This style is also used on the leaders in a team of animals pulling a vehicle. The traces attach to a whippletree behind the horse and this then pulls the load (or in larger teams may attach to further whippletrees).

There are two main plow harness types: the New England D-Ring and the Western harness. The New England D-Ring makes use of a metal D shaped ring that allows for a ninety degree angle to be maintained at the junction of the front trace and the hames regardless of the height of the implement being pulled. The Western harness does not provide this flexibility but has other useful characteristics such as a strap that runs from the britchen to the collar which stops the pull from riding up and hitting the horses in the face when descending a steep incline.

Retrieved from "http://en.turkcewiki.org/w/index.php?title=Horse_harness&oldid=1076670589"
This website is a mirror of Wikipedia, and is not affiliated with the Wikimedia Foundation.
Categories:
Hidden categories: