(Redirected from High Steward of Scotland)
Jump to navigation Jump to search
For other uses of "High Steward", see High Steward (disambiguation). 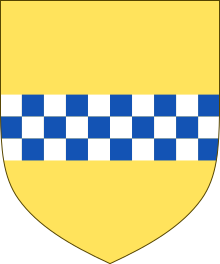 Arms of Stewart, Hereditary Grand Steward of Scotland: Or, a fess chequy argent and azure, adopted at the start of the age of heraldry, c.1200-1215. Part of the High Steward's role was managing the King's finances, the accounting for which was performed on a chequered cloth (as in the Exchequer in England) to help them count coins, hence the fess chequy 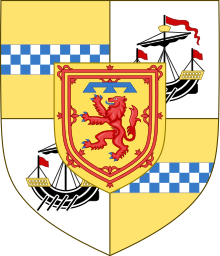 Arms of Stewart, Hereditary Grand Steward of Scotland, as revived in a new marshalling arrangement in 1974 by the Queen for use by Prince Charles, in his capacity as Duke of Rothesay, quartering the arms of the Lord of the Isles, and with overall an inescutcheon of the royal arms of Scotland with a label of three points azure.

The Prince of Wales had the idea of incorporating his Scottish titles - Duke of Rothesay, Lord of the Isles and Great Steward of Scotland - into a banner. It was designed in 1974 by Sir Iain Moncrieffe in his capacity as Albany Herald and approved by The Queen later that year. The standard, exclusively for use when The Prince is in Scotland, was first flown on 21st July 1976, when he visited Loch Kishorn, Wester Ross, to launch the Ninian Central oil platform production dock, the site of which was part of the ancient lordship of the Isles. The standard is also known as "His Royal Highness's Scottish Banner" (official web-site of the Prince of Wales[2])

Retrieved from "http://en.turkcewiki.org/w/index.php?title=Lord_High_Steward_of_Scotland&oldid=1003688973"
This website is a mirror of Wikipedia, and is not affiliated with the Wikimedia Foundation.
Categories:
Hidden categories: