Haywood County is a county located in the U.S. state of North Carolina. As of the 2020 Census, the population was 62,089.[1] The county seat and its largest city is Waynesville.[2] Haywood County is part of the Asheville, NC Metropolitan Statistical Area.

Part of indigenous territory considered the Cherokee homeland, the county was formed by European Americans in 1808 from the western part of Buncombe County. It was named for John Haywood, who served as the North Carolina State Treasurer from 1787 to 1827.[3]

In 1828 the western part of Haywood County became Macon County. In 1851 parts of Haywood and Macon counties were combined to form Jackson County.

The last shot of the Civil War east of the Mississippi was fired in Waynesville on May 9, 1865, when elements of the Thomas Legion (Confederate) skirmished with the 2nd North Carolina Mounted Infantry (Union). A monument is situated on Sulphur Springs Road in Waynesville.

Haywood County is situated amidst the Blue Ridge Mountains and contains parts of several major subranges of the Blue Ridge, namely the Great Smoky Mountains in the west and the Plott Balsams and Great Balsam Mountains in the south. Notable peaks in the county include Cold Mountain, at 6,030 feet (1,840 m), Mount Sterling, at 5,835 feet (1,779 m), and Richland Balsam, at 6,410 feet (1,950 m) in elevation. Mt. Guyot, the county's highest point at 6,621 feet (2,018 m), is the 4th highest mountain east of the Mississippi River. Black Balsam Knob, in the Great Balsam Mountains in the southeastern section of the county, is the highest grassy bald in the entire Appalachian range. Haywood County is believed to be the highest county (by mean elevation) east of the Mississippi River, with a mean elevation of 3,597 feet or 1,096 metres.[6]

A portion of Great Smoky Mountains National Park lies in the northwestern section of the county, north of Maggie Valley. Along with several mountains rising to over 6,000 feet (1,800 m) in elevation, the Haywood County area of the Smokies includes Cataloochee, which is home to a large campground and several historical structures dating to the 19th and early 20th centuries. Other protected areas include substantial sections of the Pisgah National Forest in the far northeastern and southern parts of the county.

Haywood County is governed by an elected five member four-year term County Board of Commissioners. The Board appoints and directs policy for a county manager. Haywood County is a member of the regional Southwestern Commission council of governments.[16]

The Haywood County sheriff provides court protection and jail management for the entire county and provides patrol and detective services for the unincorporated portions of the county.[17] The towns of Waynesville, Canton, and Maggie Valley have municipal police departments. As of October 1, 2020 the Sheriff's Office took over all law enforcement service for the town of Clyde.[18] Haywood County contains a portion of the Qualla Boundary which is a tribal reservation for the Eastern Band of Cherokee Indians. Lands and people living within this reservation are subject mostly to tribal/federal laws rather than county or state laws.[19]

Security for Lake Junaluska is provided by the Haywood County sheriff. The security chief is a sheriff's captain and all responding officers are sworn deputies supported by LJ security officers.[20]

Haywood County was a Democratic-leaning swing county for essentially the entire 20th century. Since 2000, however, it has seen a strong trend toward the Republican Party in national elections. Donald Trump's 2020 performance of 62.5% was the best by a Republican in Haywood County since Nixon's 1972 landslide.[22]

The two major high schools in the Haywood County Schools System, the Tuscola High School Mountaineers of Waynesville and Pisgah High School Black Bears of Canton participate in one of the fiercest high school rivalries in the Nation, as cited by the Great American Rivalry Series. The two high school football teams battle it out for the Haywood County Championship each fall, drawing up to 15,000 fans. Pisgah now leads the series at 30-26-1. The Pisgah Bears have won the last 8 meetings.

The annual ramp (Allium tricoccum) convention in Haywood County, known as the oldest in the Nation, has drawn as many as 4,000 participants a year since its inception circa 1925.[25] It is held each May.

Folkmoot USA is an international folk festival held since 1984 in Waynesville, North Carolina and surrounding communities. During its history, the two-week event has featured around 200 groups from approximately 100 countries. The Southeast Tourism Society has named Folkmoot USA one of its top twenty events for 20 years. The North Carolina General Assembly declared Folkmoot USA to be the state's official international folk festival in 2003.[26][27][28] 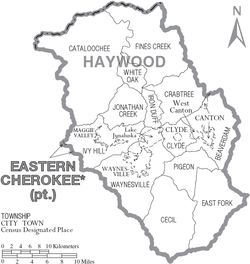 Cold Mountain, in southeast Haywood County within the Pisgah National Forest, became popularly known when featured as the title and setting of the 1997 historical novel Cold Mountain by Charles Frazier. He explored the later stages of the American Civil War in the area and a Confederate soldier's effort to return home. The novel was adapted as a major motion picture, released by Miramax Films in 2003 and starring Nicole Kidman, Jude Law, and Renée Zellweger.

Retrieved from "http://en.turkcewiki.org/w/index.php?title=Haywood_County,_North_Carolina&oldid=1125092143"
This website is a mirror of Wikipedia, and is not affiliated with the Wikimedia Foundation.
Categories:
Hidden categories: