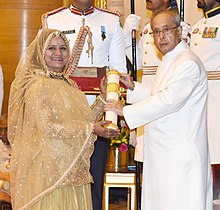 Gulabo Sapera (aka Gulabo or Dhanvantri; born 1973) is an Indian dancer from Rajasthan, India.[1]

Gulabo was the seventh child of her parents. She was buried live by her relatives just one hour of her birth Gulabi mother came to know that her daughter was burid by her replatives she was in anger but later rescued by her mom and aunt. She was born in 1973 Kalbaliya community.[2] Gulabo Sapera became a celebrity dancer later in life.[3]

In 2011, Gulabo featured in the reality television show Bigg Boss as contestant no. 12.[4] She spoke openly about the truth behind her birth and how some of her relatives from her community tried burying her alive when her father was away from home, since there were already three other girls in the family. Gulabo's father used to worship Mother Goddess so he always loved all of his daughters as blessings from goddess and more particularly the youngest one as he was afraid that someone can kill her in his absence. This story was featured in the Bigg Boss (Season 5) day one as she informed the audience about it herself. A book is also written by Thierry Robin and Véronique Guillien in French i.e. Gulabi Sapera, danseuse gitane du Rajasthan, means Gulabo sapera, the gypsy dancer from Rajasthan.[citation needed]

The Government of India awarded her the civilian honour of the Padma Shri in 2016.[5]

Retrieved from "http://en.turkcewiki.org/w/index.php?title=Gulabo_Sapera&oldid=1050300511"
This website is a mirror of Wikipedia, and is not affiliated with the Wikimedia Foundation.
Categories:
Hidden categories: