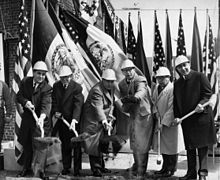 The term groundbreaking, when used as an adjective, may mean being or making something that has never been done, seen, or made before; "stylistically innovative works".

Retrieved from "http://en.turkcewiki.org/w/index.php?title=Groundbreaking&oldid=1052576868"
This website is a mirror of Wikipedia, and is not affiliated with the Wikimedia Foundation.
Categories:
Hidden categories: