(Redirected from Giants Castle)
Jump to navigation Jump to search
For another place, see Giant's Castle, Isles of Scilly. 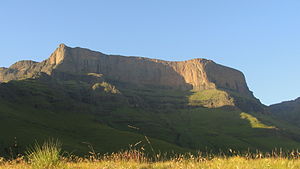 Giant's Castle is a mountain located within the Drakensberg range in KwaZulu-Natal, South Africa. It includes a grassy plateau nestled among the deep valleys of the southern end of the central Drakensberg. Together, the shape of the peaks and escarpment are thought to resemble a sleeping giant's profile; hence, its name.

Giant's Castle is best known for its nature reserve and the bushman rock art preserved at its main caves, and the game reserve is home of the eland as well as the bearded vulture and Cape vulture. The area is considered one of South Africa's many adventure areas, and attracts hikers, nature enthusiasts, and other tourists. It also hosts the Giant's Challenge marathon in April each year.[citation needed]

There are currently 14 recognized escarpment passes in the region (listed north to south):

Retrieved from "http://en.turkcewiki.org/w/index.php?title=Giant%27s_Castle&oldid=1059899887"
This website is a mirror of Wikipedia, and is not affiliated with the Wikimedia Foundation.
Categories:
Hidden categories: