(Redirected from Gerard Adriaan Heineken)
Jump to navigation Jump to search
Pale lager beer by the Dutch brewing company Heineken N.V.
This article is about the lager beer. For other uses, see Heineken (disambiguation).

Heineken Lager Beer (Dutch: Heineken Pilsener), or simply Heineken (pronounced [ˈɦɛinəkə(n)]) is a pale lager beer with 5% alcohol by volume produced by the Dutch brewing company Heineken N.V.. Heineken beer is sold in a green bottle with a red star.

On 15 February 1864,[citation needed] Gerard Adriaan Heineken (1841–1893)[3] convinced his wealthy mother to buy De Hooiberg (The Haystack) brewery in Amsterdam, a popular working class brand founded in 1592. In 1873 after hiring a Dr. Elion (student of Louis Pasteur) to develop Heineken a yeast for Bavarian bottom fermentation, the HBM (Heineken's Bierbrouwerij Maatschappij) was established, and the first Heineken brand beer was brewed. In 1875 Heineken won the Medaille D'Or at the International Maritime Exposition in Paris, then began to be shipped there regularly, after which Heineken sales topped 64,000 hectolitres (1.7 million U.S. gallons), making them the biggest beer exporter to France.

The two awards that are still mentioned on the label are the Medaille d'Or and Diplome d'Honneurs.[7]

In 2013, Heineken joined leading alcohol producers as part of a producers' commitments to reducing harmful drinking.[8]

In the end of February 2013, Heineken stopped producing the brown bottles used for the Dutch market in favor of the green color of bottles it already used for exports.[9]

In 2014, Heineken celebrated its 150th anniversary. In 2015, Heineken won the Creative Marketer of the Year Award, becoming the second company to win the award twice.[7]

Heineken launched its first non-alcoholic beer in 2017, naming it "Heineken 0.0".[11] It was evaluated positively in terms of taste, with "almost the same taste" as the full-alcohol version, even though Heineken does not claim it to be of the same taste. It was also found to be lower in calories and sugar than a soda.[12]

However, as is the case with most ‘non-alcoholic’ beers, Heineken 0.0 actually still does contain a trace amount of alcohol, about 0.05 percent, which makes it legal in Iran but not in Malaysia (for non-Muslims it is permitted).[citation needed] It has less alcohol than grape juice or orange juice, which naturally have some alcohol content even if lower than most drinks (0.30 to 0.86). [13] 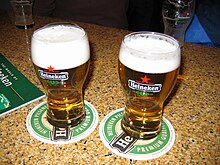 Since 1975, most Heineken brand beer has been brewed at their brewery in Zoeterwoude, Netherlands.[1] In 2011, 2.74 billion litres of Heineken brand beer were produced worldwide, while the total beer production of all breweries fully owned by the Heineken Group over all brands was 16.46 billion litres globally.[15] Heineken has been sold in more than 170 countries. They have also been incorporated with numerous beer brands in countries all over the world including Mexico, China, Australia and various countries in Africa. 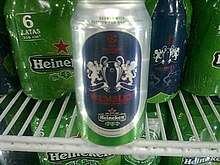 Heineken was the major sponsor of UEFA Champions League and Rugby World Cup; major sponsorship of Rugby Union had begun in Wales with the Welsh Premier Division competition.

Dating back to 1997, Heineken has had a long withstanding relationship with the Bond franchise, consecutively being featured in 7 of their films. This is currently the brand's largest global marketing platform as of 2015.[17]

In 2016, Heineken became the Official Beer of the FIA Formula One World Championship starting from the Canadian Grand Prix.[18]

Retrieved from "http://en.turkcewiki.org/w/index.php?title=Heineken&oldid=1029565729#History"
This website is a mirror of Wikipedia, and is not affiliated with the Wikimedia Foundation.
Categories:
Hidden categories: