Gauri Khan (née Chhibber; born 8 October 1970) is an Indian film producer and designer who has designed spaces for high-profile individuals such as Mukesh Ambani, Roberto Cavalli and Ralph Lauren,[1] as well as Bollywood celebrities such as Karan Johar,[1] Jacqueline Fernandez[2] and Sidharth Malhotra.[3] She is the co-founder and co-chairperson of the film production company Red Chillies Entertainment and its subsidiaries. Gauri is married to Bollywood actor Shahrukh Khan. In 2018, she was named as one of Fortune India magazine's "50 Most Powerful Women".

Gauri was born in Delhi to Punjabi Hindu parents Savita and Colonel Ramesh Chandra Chhibber who hail from Hoshiarpur.[4] She was raised in the suburb of Panchsheel Park, Delhi.[5]

She did her schooling at the Loreto Convent School, Delhi,[6] she completed twelfth from Modern School, Delhi; and graduated from Lady Shri Ram College with B.A. (Hons.). She also completed a six-month course in fashion design from the National Institute of Fashion Technology[1] and learnt tailoring due to her father's garment business.[citation needed]

In 2002, Khan and her husband Shah Rukh Khan established the film production and distribution company Red Chillies Entertainment.[7] It was transformed from the now defunct Dreamz Unlimited which the couple first established in 1999. She serves as co-chairperson and the main producer of all the films produced under the banner. The first film she produced was Farah Khan's directorial debut Main Hoon Na. The film performed well at the box office, becoming the second highest-grossing film of the year. She also made a guest appearance in one of the films she has produced Om Shanti Om (2007).

She is managed by the Bottomline Media, and close confidante and friend Tanaaz Bhatia from NYC.[8] Khan also designed a fashion collection titled 'Cocktails and Dreams' for Satya Paul in 2016.[9]

Khan first expressed interest in interior design as a hobby while renovating her Bandra bungalow, Mannat at Lands End, Siraj Dokadia Road.[10] The bungalow is a tourist spot and a heritage building deemed important to the townscape and hence exempt from demolition. However, in 2010, she professionally ventured into interior designing in partnership with interior designer and close friend Sussanne Khan to design exclusive interior projects together.[11] The same year, they collaborated on their first commercial project together in Vadodara.[11] In 2011, Khan (Gauri) partnered with Khan (Sussanne) again to launch and introduce The Charcoal Project foundation in Mumbai.[12] 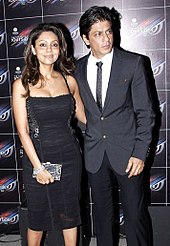 Khan with her husband Shah Rukh Khan in 2012

Khan launched her first concept store called The Design Cell located in Worli, Mumbai in early 2014. The store showcases furniture designed by Khan herself as well as various other Indian designers.[13] In 2016, Khan was invited to show her designs at the Maison et Objet show in Paris.[14]

In August 2017, Khan launched her design studio, Gauri Khan Designs that spans over 8,700 sq ft (810 m2) at Juhu, Mumbai.[15] Khan has collaborated with various international artists including Roberto Cavalli and Ralph Lauren for home accessories.[16] In a 2017 interview with Vogue India, Khan spoke about her project, she said "It’s been an exciting experience, seeing it all come together. I’ve been influenced by my travels across India and the globe. I take a keen interest in the architecture of places when I travel."[17] For her work in the field of interior design, Khan was awarded with the Excellence in Design Award at the Hello! Hall of Fame Awards in 2018.[18]

In 2017, Khan curated a collection of designer lights for TISVA, a premium home decorative lighting brand from Usha International Limited which introduced smart-control magnetic systems—launched for the first time in India.[19]

Khan with her daughter Suhana Khan in an event in 2017.

Khan is known for keeping a low profile and being media shy, though she is often cited as one of the most stylish women in Bollywood.[20] She appeared on the cover of page of the popular Indian lifestyle magazine, Vogue India in January 2008. The photos were taken by the well-known British lifestyle photographer Chris Craymer. The magazine called her the "First Lady of Bollywood".[21] She appeared again on the cover page of Vogue India along with Sussanne Khan in April 2012. She also walked the ramp alongside her husband for filmmaker turned fashion designer Karan Johar at the HDIL India Couture Week 2009.[22]

In 2008, she appeared in a television and print commercial for the home furnishings brand, D'decor along with her husband. The couple play themselves in the commercial.[23]

Gauri first met Shah Rukh Khan in 1984 in Delhi, before the start of his successful career in Bollywood.[24] The couple married on 25 October 1991 in traditional Hindu wedding ceremony, after a six-year relationship.[25]

They have a son Aryan Khan (born 1997) and a daughter Suhana Khan (born 2000). In 2013 they became parents of a third child, a son, named Abram Khan, who was born through a surrogate mother.[26] According to Shah Rukh, he believes in both religion of Islam and Hinduism, respecting his wife's religion. Their children follow two religion; at home the Qur'an is situated right next to the Hindu deities.[27]

Retrieved from "http://en.turkcewiki.org/w/index.php?title=Gauri_Khan&oldid=1050206847"
This website is a mirror of Wikipedia, and is not affiliated with the Wikimedia Foundation.
Categories:
Hidden categories: