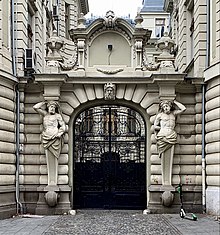 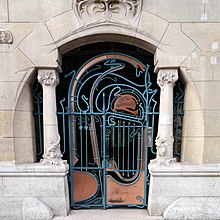 Candi bentar, a typical Indonesian gate that is often found on the islands of Java and Bali

A gate or gateway is a point of entry to or from a space enclosed by walls. The word derived from old Norse "gat"[1] meaning road or path; But other terms include yett and port. The concept originally referred to the gap or hole in the wall or fence, rather than a barrier which closed it. Gates may prevent or control the entry or exit of individuals, or they may be merely decorative. The moving part or parts of a gateway may be considered "doors", as they are fixed at one side whilst opening and closing like one.[2]

A gate may have a latch that can be raised and lowered to both open a gate or prevent it from swinging.[3] Locks are also used on gates to increase the security. Larger gates can be used for a whole building, such as a castle or fortified town. Actual doors can also be considered gates when they are used to block entry as prevalent within a gatehouse. Today, many gate doors are opened by an automated gate operator.

Japanese Torii at Itsukushima Shrine, a UNESCO World Heritage Site Japan, where the Hindu goddess Saraswati is worshipped as the Buddhist-Shinto goddess Benzaiten

Wikimedia Commons has media related to Gates and Portals.

Look up gate in Wiktionary, the free dictionary.
Retrieved from "http://en.turkcewiki.org/w/index.php?title=Gate&oldid=1126395418"
This website is a mirror of Wikipedia, and is not affiliated with the Wikimedia Foundation.
Categories:
Hidden categories: