The city is a historic center for textile manufacturing and was the site of the Loray Mill Strike of 1929, which became a key event in the labor movement. While manufacturing remains important to the local economy, the city also has well-developed healthcare, education, and government sectors.

Gastonia is named for William Gaston, a jurist and United States Representative from North Carolina.[8]

The Loray Mill strike of 1929 in Gastonia was one of the most notable strikes in the labor history of the United States. The role of organizers for Communist Party-affiliated National Textile Workers Union (NTWU) alienated religious leaders in Gastonia, who denounced the organizers' ideology, undermining support for the strike.[9] The strike collapsed after the death of Gastonia's police chief, Orville Alderholt, led to a murder trial of several militants including NTWU chief organizer Fred Beal.[10] The strike largely failed in attaining its goals of better working conditions and wages, and the American labor movement was never able to gain a foothold among textile workers in Gastonia. The strike, however, became for a while an international cause célèbre, figuring in several novels published in the 1930s. 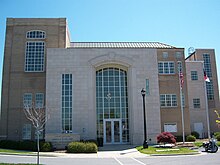 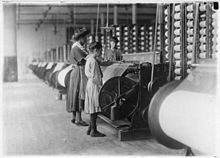 Many shutdowns and job losses have plagued Gastonia over the past decade. Gastonia maintains a relatively strong manufacturing workforce, but many workers are laid off and many more are facing job losses. The city had an unemployment rate of 7.9% as of 2010; 12,536 of the 71,341 residents lived and worked in the city, with a daytime population change of +10,610. The city is the international corporate headquarters for textile company Parkdale Mills, the number one manufacturer of spun yarn in the world.[19] The company also operated two production facilities in Gastonia and several in surrounding communities. Parkdale, like many other companies, has closed plants and moved production to other countries.

The Schiele Museum of Natural History features a number of permanent exhibits, including the Hall of North Carolina Natural History and the Henry Hall of the American Indian.[21] The museum is also home to the James H. Lynn Planetarium, the only planetarium in the Charlotte area.[22]

The Daniel Stowe Botanical Garden is located just southeast of the city in Belmont on NC 279.

The U.S. National Whitewater Center (on the Catawba River) is located east of the city in neighboring Mecklenburg County.

Crowders Mountain State Park is located west of the city, near Kings Mountain. The park offers a number of hiking trails, as well as campgrounds, picnic areas, rock climbing, and fishing.[23]

Eastridge Mall, located at exit 20 on North New Hope Road, is the only indoor regional mall in the area; it is anchored by Belk and Dillard's. The mall is also home to over 80 specialty stores, a full-service food court, Red Lobster and other services.

There are also a few more shopping centers across the city with other well-known national and local retailers.

The Gastonia Honey Hunters of the Atlantic League of Professional Baseball, a partner of Major League Baseball, will begin play in 2021 at FUSE District Stadium, which is part of an overall renewal project called the Franklin Urban Sports and Entertainment (FUSE) District. Before the Honey Hunters' arrival, the Gastonia Grizzlies, a Coastal Plain League summer collegiate wood-bat team, played at Sims Legion Park.

The Gastonia Gargoyles play rugby at Gaston County's North Belmont Park. The team is part of the Carolinas Geographical Union (CGU) and plays Division IV men's social rugby. The club plays in the fall (August - November) and spring (Feb - May) seasons. The club also hosts an annual rugby 7's tournament in Clover, South Carolina, during the Clover Scottish Games on the first or second Saturday in June.

All public K–12 schools in Gaston County, including the city of Gastonia, are part of the Gaston County Schools (GCS). GCS operates schools at the elementary, middle, and high school levels.

Gastonia also has a charter school, Piedmont Community Charter School, that serves K–12 grade students. Currently the school has an Elementary campus along with a Secondary campus. A new High School campus is presently under construction. The new campus is set to open for the 2020–2021 school year.[25]

Although there are no colleges or universities within the city limits of Gastonia, higher education is well represented in the greater Gastonia area. Gaston County is home to Belmont Abbey College (Belmont; four-year) and Gaston College (Dallas, Lincolnton (Lincoln County), and Belmont; two-year).

The Gaston County Public Library has three locations in the city.[26]

Gastonia is served by numerous FM and AM radio stations, mainly based in nearby Charlotte. The city has one licensed AM station: WGNC 1450 AM; it has two licensed FM stations: WGNC 101.1FM and WBAV 101.9 FM.

Interstate 85 (I-85) links Gastonia directly with Charlotte, Greensboro, Durham, and Petersburg/Richmond (to the northeast) and Spartanburg, Greenville, Atlanta and Montgomery (to the southwest). Gastonia's transportation network is supplemented by one additional freeway (US 321), the freeway portion of which directly connects Gastonia with transcontinental I-40 and the city of Hickory, North Carolina, 35 miles (56 km) north of Gastonia.

Gastonia is also served by three federal highways: US 29, US 74 (US 29 and US 74 follow the same route through the city), and US 321. US 29 parallels I-85 through the Carolinas, while US 74 provides direct east–west links to Charlotte and Wilmington (east), and Asheville and Cherokee (to the west). US 321 links Gastonia to central South Carolina and the Blue Ridge Mountains in northwest North Carolina. State highways include: NC 7, NC 274, NC 275 and NC 279. 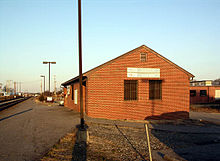 Gastonia Transit (GT) is Gastonia's city transit provider. The bus service operates on a fixed-route system covering most of the city and stops are clearly visible around town. Buses run Monday-Saturday, and transfer downtown Gastonia at the Bradley Station. Regular fare is $1.00, transfers are free.

Amtrak's Crescent (trains 19, 20) connects Gastonia (GAS) with the cities of (to the north) New York, Philadelphia, Baltimore, Washington, and Charlotte, and (to the south) Atlanta, Birmingham, and New Orleans. The unmanned Amtrak station is situated at 350 Hancock Street.

General service: Gastonia Municipal Airport (AKH) handles most of the city's private air service needs. It is located in the southeast part of the city on Gaston Day School Road, off NC 274 (Union Road).

Gotha was Gastonia's first sister city in 1994. Santiago de Surco became an official partner in March 2004. Mayor Jennie Stultz visited Gotha in 2007. In December 2007, the mayor of Santiago de Surco visited for the annual lighting of the Christmas tree in the Rotary Pavilion. He was invited to light the tree along with one of the city's councilmen.

Retrieved from "http://en.turkcewiki.org/w/index.php?title=Gastonia,_North_Carolina&oldid=1065537025"
This website is a mirror of Wikipedia, and is not affiliated with the Wikimedia Foundation.
Categories:
Hidden categories: