Foreign Affair: The Farewell Tour (also known as the Foreign Affair: European Tour 1990) is the seventh concert tour of American-born Swiss singer Tina Turner. The tour supported her seventh studio album Foreign Affair (1989). The tour was Turner's first stadium tour and only reached European countries. Overall, the tour was attended by approximately three million people—breaking the record for a European tour that was previously set by The Rolling Stones.[2][3][4]

The tour is notable as Turner's only tour to not reach North America[a]. Since the tour was considered a farewell tour (at that time), Turner wanted to exclusively tour Europe to thank her fans for supporting her career after she became a solo artist.

The tour was advertised as a "farewell" tour as Turner began to concentrate on potential acting roles.[5] During an interview, Turner stated,[2]

"I've always thought this would be the final one but I must admit I now have mixed feelings. I'm the first woman to fill all these stadiums and the feeling from all those fans night after night was fantastic. I don't want to close that door completely. I'm going away for about a year and when I'm ready to return, I just hope the fans will want whatever I have to offer."

Turner would return to touring in 1993 with her North American tour, "What's Love? Tour". 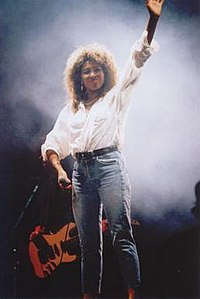 Turner bidding farewell during the concert at Woburn Abbey

The groundbreaking tour was filmed at the Estadi Olímpic de Montjuïc in Barcelona and was released on VHS titled, "Do You Want Some Action?". To celebrate Turner's 2021 induction into the Rock and Roll Hall of Fame, a remastered version of the recording was released in 2021, alongside an audio CD of the full concert.[6]

Fan-recorded footage of opening night in Antwerp is available on YouTube. The concert at Pallatrussadi, Milan was filmed and was also used as part of the MTV film. Although the real professional, multi-camera recording is not in circulation, there is a fan-shot, full-length video of the concert on YouTube.

The concert at Woburn Abbey was filmed and part of which was used in an MTV mini-documentary, promoting Turner's tour. The intro to this show was used as part of an interview with Turner and the music video to "Be Tender with Me Baby" is the encore to this show. It is available on YouTube and the single for the song. There are no known copies of the full-length in circulation.

Additionally, the concert in Athens was broadcast live on ET2.

Retrieved from "http://en.turkcewiki.org/w/index.php?title=Foreign_Affair:_The_Farewell_Tour&oldid=1065316878"
This website is a mirror of Wikipedia, and is not affiliated with the Wikimedia Foundation.
Categories:
Hidden categories: