The flag of Nazi Germany, officially the flag of the German Reich, featured a red background with a black swastika on a white disc. This flag came into use initially as the banner of the Nazi Party (NSDAP) after its foundation. Following the appointment of Adolf Hitler as Chancellor in 1933, this flag was adopted as one of the nation's dual national flags, the other being the black-white-red triband of the German Empire.

This dual flag arrangement was ended on 15 September 1935, one year after the death of Reich President Paul von Hindenburg, and the Nazi flag became the only national flag of Germany. One reason for the change may have been the "Bremen incident" of 26 July 1935, in which a group of demonstrators in New York City boarded the ocean liner SS Bremen, tore the Nazi Party flag from the jackstaff, and tossed it into the Hudson River. When the German ambassador protested, US officials responded that the German national flag had not been harmed, only a political party symbol.[1] The new flag law was announced at the annual party rally in Nuremberg in 1935,[2] where Hermann Göring claimed the old black-white-red flag, while honoured, was the symbol of a bygone era and under threat of being used by "reactionaries".[3]

After rejecting many suggestions and colours, the process of choosing a new flag was described by Hitler as follows:

"I myself, meanwhile, after innumerable attempts, had laid down a final form; a flag with a red background, a white disk, and a black swastika in the middle. After long trials I also found a definite proportion between the size of the flag and the size of the white disk, as well as the shape and thickness of the swastika."

After Hitler was appointed Chancellor of Germany on 30 January 1933, the black-red-gold tricolour flag was discarded; a ruling on 12 March established two legal national flags: the reintroduced black-white-red imperial tricolour and the flag of the Nazi Party.[4][5]

Nazi ensigns had a through and through image, so the "left-facing" and "right-facing" version were each present on one side. However, the Nazi flag on land was right-facing on both sides.[a]

Albert Speer, in his book Inside the Third Reich, stated that: "in only two other designs did he (Adolf Hitler) execute the same care as he did his Obersalzberg house: that of the Reich War Flag and his own standard of Chief of State", showing that Hitler was an avid vexillographer (flag designer).

An off-centred disk version of the swastika flag was used as the civil ensign on German-registered civilian ships and was used as the Jack on Kriegsmarine warships. There is debate as to whether the off-centred disk flag was the official national flag from 1935 to 1945, such as at the popular vexillogy site, Flags of the World.[7] The centred-disk flag was commonly used by civilians and the German armed forces aside from the navy. 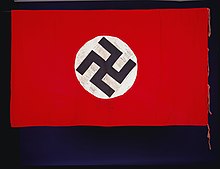 A flag from Nazi Germany found near the south bank of the Rapido River about 4000 feet (1219 meters) west of Monte Cassino by J. McQuorkindale on the night of 17–18 February 1944. Note that the swastika appears to be left-facing in this image.

From 1933 to at least 1938 in Nazi Germany, before any official swastika flag went into use, it had to be put into a ceremony where it touched the "Blutfahne" or Blood flag,[citation needed] the swastika flag used by Nazi paramilitaries during the failed Beer Hall Putsch in 1923. This lengthy ceremony took place at every Nuremberg Rally. It is unknown whether this tradition was continued after the last Nuremberg rally in 1938.[citation needed]

The Nazi flag takes its colours from the imperial tricolour, with Hitler writing that he "was always for keeping the old colours," because he saw them as his "most sacred possession" as a soldier, and also because they suited his personal taste.[8] Hitler added new symbolism to the colours, stating that "[t]he red expressed the social thought underlying the movement. White the national thought," and that the black swastika was an emblem of the "Aryan race" and "the ideal of creative work which is in itself and always will be anti-Semitic."[8]

At the end of World War II, after the defeat of Nazi Germany, the first law enacted by the Allied Control Council abolished all symbols and repealed all relevant laws of the Reich.[9] The possession of swastika flags has been forbidden in several countries since then, with the importation or display of them forbidden particularly in Germany. 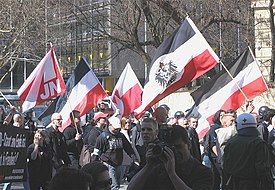 Today, the Nazi flag remains in common use by neo-Nazi supporters and sympathisers, outside Germany, while within the country, neo-Nazis use the Fatherland Flag from the German Empire instead, due to ban on the Nazi flag use. However, the imperial flag did not originally have any racist or anti-Semitic meaning.[10] 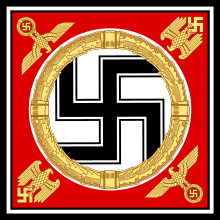 Standard of the "FBB" (reverse)

The standard was used for all purposes and consisted of a square of red material in a variety of regulated sizes. In the centre of the square was a white disk, containing a garland of gold-coloured oak-leaves. Set on the white disk was a black upright swastika. In each corner of the red field was a gold-coloured eagle emblem: In the upper left and lower right corner it was a "Party-eagle", whereas it was a "Wehrmacht-eagle" in the upper right and lower left corner. The entire standard was edged on all four sides with a border of black and white bands.

The flag was designed by Hitler personally. It was made in two forms: a normal cloth flag (which flew at the Reichs Chancellery when he was present), and a 'solid' type which was used on his car, at rallies, and other political events. Both types were also used at his residence at Obersalzberg.

The SS-formation Leibstandarte SS Adolf Hitler ("LSSAH") used a variant of the Führerstandarte as their regimental and battalion color that was introduced in September 1940 after the German victory over France.

Following the Soviet Capture of Berlin, the standards were taken to Moscow. At the Victory Parade of June 24th, 1945, soldiers of the elite "Division Named After Dzerzhinsky" ("Отдельной Дивизии Особого Назначения Внутренних Войск МВД СССР имени Дзержинского") threw the Führer standards along with other standards of Third Reich leaders and organizations at the foot of Lenin's Mausoleum in a gesture of enemy humiliation. The standards are kept in Moscow away from public view.

There was a Regiment standard of the "LSSAH" that displayed the "Führerstandarte" on its obverse and reverse, as well as a standard for the "Führer Escort Battalion", a unit of the army. The latter standard had a great similarity to the guidon used by the LSSAH but could be distinguished, apart from other details, by the different color of the fringes: LSSAH used gold, while the FBB used silver.

Retrieved from "http://en.turkcewiki.org/w/index.php?title=Flag_of_Nazi_Germany&oldid=1111940394"
This website is a mirror of Wikipedia, and is not affiliated with the Wikimedia Foundation.
Categories:
Hidden categories: