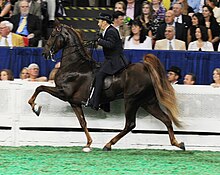 An American Saddlebred performing the rack

Five-gaited horses are notable for their ability to perform five distinct horse gaits instead of simply the three gaits, walk, trot and canter or gallop common to most horses.[a] Individual animals with this ability are often seen in the American Saddlebred horse breed, though the Icelandic horse also has five-gaited individuals, though with a different set of gaits than the Saddlebred.

In the American Saddlebred and related breeds, the five gaits performed are the walk, trot, canter, and two ambling gaits: the rack, a fast, lateral, four-beat gait that is synchronous— "each foot meets the ground at equal, separate intervals";[4] and a "slow gait", a slower, smooth collected four-beat gait that is asynchronous — "the lateral front and hind feet start almost together but the hind foot contacts the ground slightly before its lateral forefoot."[4] Another name for the slow gait is the stepping pace.[5] The USEF is clear that the slow gait is not merely a slow version of the rack,[4] but the primary difference between the two is the slight hesitation between the second and third beats of the slow gait.[5] A five-gaited horse might also perform the fox trot rather than the stepping pace.[6]

In the Icelandic horse, the five gaits are the walk, trot, canter, tölt and the skeið, or flying pace. The tölt is a lateral four-beat gait compared to the rack of the Saddlebred, but in style of performance sometimes more closely resembles the largo of the Paso Fino, or the running walk of the Tennessee Walking Horse. Like all lateral ambling gaits, the footfall pattern is the same as the walk (left hind, left front, right hind, right front), but differs from the walk in that it can be performed at a range of speeds, from the speed of a typical fast walk up to the speed of a normal canter. Some Icelandic horses prefer to tölt, while others prefer to trot.[7] The flying pace is a two-beat lateral gait, with a moment of suspension between the two sets of footfalls. At racing speeds, horses can perform the flying pace at speeds close to 30 mph.[8] Icelandics that can perform the tölt but not the flying pace are called "four-gaited."[7]

Other gaited horse breeds may be able to perform five gaits, and individual horses of breeds not normally noted for possessing ambling gaits may also do so. Examples of these include the part-Saddlebred National Show Horse,[9] the Arabian horse,[10][b] the Morgan,[12] and the Morab.[13]

Retrieved from "http://en.turkcewiki.org/w/index.php?title=Five-gaited&oldid=1064563179"
This website is a mirror of Wikipedia, and is not affiliated with the Wikimedia Foundation.
Categories: