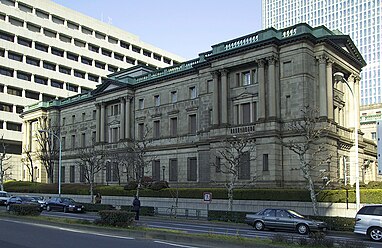 The industry which has a range of businesses that deal with money like banks, insurance companies, accounting companies, finance companies, taxation, investment funds, credit companies, and few government enterprises is called the finance industry. The activities or services within this industry that cater to the economy of the country are called financial services. Therefore, the economic services provided by the finance industry in Japan are called financial services in Japan. These services are present across the world, at regional, international and national level developed economic and demographic regions such as Sydney, New York, London, Tokyo, etc.[1]

Japan being one of the worlds' major industrialised countries, its major financial bodies are commercial banks, Japan also has foreign exchange companies, securities, and capital markets. The government-owned institutions inject funds into the economy and money markets for liquidity and also help the Bank of Japan to apply the monetary policy.[2]

The currency of Japan is Japanese Yen, and the Japanese Yen to European pound exchange rate is the most popular. JPY is the code of the currency and ¥ is the symbol of the Japanese Yen. The minor unit of Japanese Yen is 1/100 which is called a Sen. The central bank rate is -0.10. JPY's inflation rate is 0.50% presently (subject to change as the market is constantly changing). The currency denominations in coins are ¥1, ¥5, ¥10, ¥50, ¥100, ¥500 and the notes are ¥1000, ¥5000, ¥10000 and ¥2000 which is rarely used. Japan's central bank is the Bank of Japan. Japanese Yen is the most traded currency in Asia, and third in the world the reason being its relative lower interest rates. When a currency with a low-interest rate is sold to buy a currency with a higher rate of interest it is called a carry trade. Therefore, the Japanese Yen is mostly used to carry trade with the U.S. Dollar and the Australian Dollar.[3]

Currency exchange counters can be found in almost every major airport. Japan is a cash-based society and value a weighted wallet. However, you can use an international credit card for transactions like taxis, train tickets, and few other services[4]

The commercial banking industry is deal more directly in terms of saving and lending of money whereas the financial services also have insurance, risk distribution, investments, etc. the commercial banking sector issues debit and credit cards, keeps deposits and lends money to the general public. It largely deals with the general public. The main revenue system of the banks would be through the interest rates on the credits, fees, commission, and rates paid to the depositors.[5]

The investment banks facilitate buying and selling stocks, wealth management, and tax advice, merger and acquisition advice, etc. These banks are usually not for the general public but the high net worth customers and high deal-making institutions.[5]

The Japanese banking system is quite stable as the banks' liquidity, asset risk and environment outweigh any other negative factors. There are about 200 banks in Japan. The Bank of Japan controls the domestic money supply and inject money as a last resort to the banks. City banks, regional banks, and trust banks are domestically licensed banks in Japan and there are many foreign banks as well.[6]

Mitsubishi UFJ Financial group – this group has been founded in 1880, its main operations are done through retail banking, corporate banking, trust assets, and global business groups. It has an asset of US$2901 billion and US$14 billion of income as of 2016. It has an employee strength of 140000 and is present in 50 countries across the world.[6]

Japan Post Bank – this bank serves the corporate and retail clients in Japan and across the world. It has an asset of US$714.4 billion and US$3 billion of income as of 2016.[6]

Mizuho Financial Group – this bank provides financial and banking services through various business sectors like the retail and business; corporate and institutional; global markets, etc. It has an asset of US$400 billion and US$5 billion of profit as of 2016.[6]

However, according to the report on the Financial Services of Japan 2019/2020, banks' earning power has been lacking in Japan, the city banks are not rising so banks are accelerating the business model to be rebuilt for businesses.[7]

Both Japanese and foreign citizens may apply for an international ATM card corresponding to an interbank network such as Cirrus or PLUS. Foreign citizens need to show the Alien Registration Card for account creation.

Interbank ATMs are common throughout the country, especially in densely populated urban areas.

Issues in the Japanese financial sector[edit]

Due to the global financial crisis in 2008, the skill development programs initiated by the firms specifically have been drastically reduced. Also, because the Japanese financial institutions have long skill training sessions, the employee attendance ratio has decreased due to which the institutions now have to hire only a few employees.[8]

The female labour force in the Japan labour market[edit]

Significant attention has been given to the female employees as there were labour shortages and aged society. The financial sector uses female labour more than any sector in Japan. In the financial sector as there is more female labour under the age of 34-44. However, in this age group, female regular employees decline due to maternity reasons. Therefore, financial institutions might need to assist female workers in the workplace to continue their jobs even after their maternity period.[8]

The mental health of the financial sector employees[edit]

The management should redesign their practices and environment to allow working few hours and adding value to the financial services, to utilise the abilities, skills, and knowledge of women employees. The firms can support assessing the employees on the work and value they are adding instead of the number of working hours to retain and support the talent force in the workplace regardless of considering any genders to improve work–life balance.[8]

Due to the great east Japan earthquake, post-Lehman financial crisis and September 11 terrorist attacks in the U.S. in the financial years of 2001-02, 2008, and 2011; the Japanese insurance industry has shown lose but except these years, it has shown extraordinary performance since 2000 while earning net and ordinary profits every year. Besides these, the Japanese insurance core underwriting operations have not been very great and profitable.[9]

The Japan insurance industry is amongst the world's largest insurance markets, with its volume of 35 trillion Japanese Yen which bags the second position after the United States in the annual premium. As the ageing population is rising, birth rates lowering and the interest rates also lowering the life and non-life insurances face tremendous challenges in the market of Japan.[11]

The life insurance market of Japan ranks the 3rd in the World in its size as 90% of the Japanese carry life insurance policies. It ranks after the U.S. and China. The volume of enforced policies has dropped when it reached a peak of 1.5 trillion in the late 1990s due to the decline in the taskforce population or put the other way as the ageing population started increasing.[11]

Life insurance users can be benefitted by the insurance firms focusing on current profitable products' customers, creating more value-adding services and products which cater to a wide variety of diverse customers, developing models to increase customer's value of lifetime, considering preparing the products that would be available on e-commerce platforms by partnering in future and using the artificial intelligence, big data and cloud technologies to increase the efficiency and flexibility of functions and operations.[11]

Foreign companies and banks in Japan[edit]

KPMG - KPMG in Japan with its experience in assisting various financial organisations in and outside of Japan helps its clients to prosper in their business goals in and out of the Japanese market. Its services include audit & assurance, legal, risk, financial, consulting, and tax advisory, etc.[12]

Japan's financial market has around 50 foreign banks operating. ANZ, National Australia Bank, and Commonwealth Bank are some of the Australian banks having their operations in Japan which are located in the Japans' capital Tokyo and few of their branches extend to Osaka as well. In terms of international banking, bank transfer is the most popular and best way to send money to the outside of Japan. This process can be done both at a bank and online as well. Japan's customs department must be notified in case of a transaction over 1 million Japanese Yen is being processed.[15]

Retrieved from "http://en.turkcewiki.org/w/index.php?title=Financial_services_in_Japan&oldid=995584971"
This website is a mirror of Wikipedia, and is not affiliated with the Wikimedia Foundation.
Categories:
Hidden categories: