Feature Comics, originally Feature Funnies, was an American comic book anthology series published by Quality Comics from 1939 until 1950, that featured short stories in the humor genre and later the superhero genre.[1] 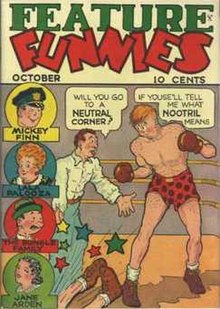 The first issue of Feature Funnies.

The series started out as a reprint collection of newspaper comic strips that was published by Harry "A" Chesler between 1937 and 1939, for twenty issues entitled Feature Funnies. It featured cannily mixed color reprints of popular newspaper comic strips like Joe Palooka, Mickey Finn and Dixie Dugan with a smattering of new features.

Hiring cartoonist Rube Goldberg and Goldberg's assistant, Johnny Devlin,[2] Arnold in mid-1937 began publishing Feature Funnies from his office as at 389 Lexington Avenue in Manhattan. Goldberg drew many of the covers.

The new material came from comics "packagers", small studios that sprang up to produce comics on demand for publishers looking to enter the emerging comic-book field. Arnold initially bought from the quirkily named Harry "A" Chesler shop but later relied solely on Eisner & Iger, headed by Will Eisner and Jerry Iger. Arnold recalled in the early 1970s: "I believe the first feature I purchased from Eisner & Iger was 'Espionage' in 1938 for Feature Comics (then Feature Funnies)".[3]

Other newspaper comic strip characters in Feature Funnies included the constantly bickering Bungle Family and girl reporter Jane Arden. Feature Comics then continued the numbering with issue #21, and ran until #144.

Retrieved from "http://en.turkcewiki.org/w/index.php?title=Feature_Comics&oldid=1049203092"
This website is a mirror of Wikipedia, and is not affiliated with the Wikimedia Foundation.
Categories:
Hidden categories: