(Redirected from Farm house)
Jump to navigation Jump to search
Chief dwellings attached to farms
This article is about the building. For the social fraternity, see FarmHouse. For the album by the American band Phish, see Farmhouse (album). 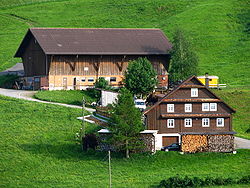 A farmhouse in Einsiedeln, Switzerland (bottom) 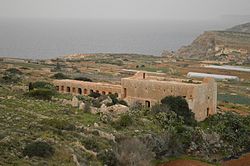 The Devil's Farmhouse in Mellieħa, Malta, built by the Order of St. John with limestone

A farmhouse is a building that serves as the primary quarters in a rural or agricultural setting. Historically, farmhouses were often combined with space for animals called a housebarn. Other farmhouses may be connected to one or more barns, built to form a courtyard, or with each farm building separate from each other.[1][2]

Types of farmhouses in Europe include the following:

A Bresse house (French: Ferme bressane) is a type of farmhouse found in the Bresse region and characterized by its long length, brick walls and wooden roof.[3][4] A Mas is a traditional farmhouse unique to Provence and Southern France.[5][6]

Historically there were three main types of German farmhouses, many of which survive today. The Low German house or Niedersachsenhaus (Lower Saxony house) is found mainly on the North German Plain, but also in large parts of the Netherlands. It is a large structure with a sweeping roof supported by two to four rows of internal posts. The large barn door at the gable end opens into a spacious hall, or Deele, with cattle stalls and barns on either side and living accommodation at the end. The Middle German house may also be a single unit, but access is from the side, and the roof is supported by the outside walls. Later this type of mitteldeutsches Haus was expanded to two or more buildings around a rectangular farmyard, often with a second story. The South German house is found in southern Germany and has two main variants, the Swabian or Black Forest house and the Bavarian farmstead.[7]

A Cascina a corte is a courtyard building whose arrangement is based on the Roman villa found in the Po Valley of northern Italy.[citation needed] A house called Casa colonica [it] in Italy is a type of farmhouse where the residents work the land but do not own the farm.[8]

Norwegian farmhouses used timber or logs and were built using Scandinavian vernacular architecture. The first examples are traced back to the 13th century. In some cases farmhouses are built on steep hillsides of the fjords, such as the Me-Åkernes farmland.

Alqueria is the name given to farmhouses in Valencia. The Baserri is found in the Basque Country in Northern Spain and Southwestern France. The Cabaña pasiega is a two-level dwelling for farmers and livestock found in Cantabria. The Masia originates from Catalonia, and the Palloza is a primitive, circular dwelling with a conical roof. Cortijos also called Caserías when related to large rural estates are found Andalusia, Extremadura, Murcia, Ciudad Real and Albacete. Hacienda also occasionally functioned as a farmhouse. 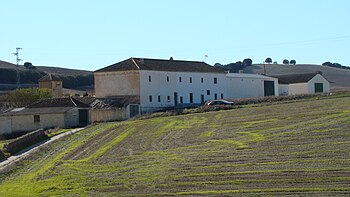 Types of farmhouses in North America include the following:

Canadian farmhouses were influenced by European settlers. In Quebec, the style varied from Gothic to Swiss, with the kitchen being the most important room in the house.[11] In Ontario, the farmhouses of the late 19th century were of Victorian influence. Earlier ones used clapboard and later variations had brick. Many had front porches. In the west, dwellings varied from single-story wooden homesteads to straw huts. Wooden houses were built later as railroads brought wood from the Rockies (Alberta, British Columbia). By the early 1900s houses could be purchased as kits from several Canadian and American companies.[12][13] Canadian homes often differ from their American counterparts in that the porch was often enclosed.

From 1850 onward many featured vernacular interpretations of the more formal architectural styles, such as Greek Revival, Italianate, Carpenter Gothic, and Queen Anne.[citation needed]

American farmhouses had a straightforward construction designed to function amidst a working farm in a rural setting.[14] They had a simple rectangular floor plan, usually built with local materials, and included a dominant centrally-located fireplace for cooking and heating.[2] 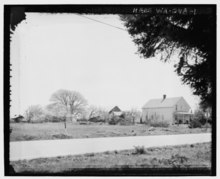 Retrieved from "http://en.turkcewiki.org/w/index.php?title=Farmhouse&oldid=1021912521"
This website is a mirror of Wikipedia, and is not affiliated with the Wikimedia Foundation.
Categories:
Hidden categories: