A farewell speech or farewell address is a speech given by an individual leaving a position or place. They are often used by public figures such as politicians as a capstone to the preceding career, or as statements delivered by persons relating to reasons for their leaving. The term is often used as a euphemism for "retirement speech," though it is broader in that it may include geographical or even biological conclusion.

In the Classics, a term for a dignified and poetic farewell speech is apobaterion (ἀποβατήριον), standing opposed to the epibaterion, the corresponding speech made upon arrival.[1]

Many U.S. presidential speeches have been given the moniker "farewell address" since George Washington's address in 1796.[2] Some notable examples: 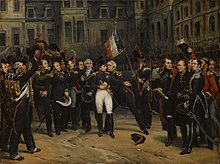 Napoleon saying farewell to the Old Guard at the Palace of Fontainebleau, after his first abdication (1814)

Retrieved from "http://en.turkcewiki.org/w/index.php?title=Farewell_speech&oldid=1059472713"
This website is a mirror of Wikipedia, and is not affiliated with the Wikimedia Foundation.
Categories:
Hidden categories: