Farewell Yellow Brick Road is an ongoing tour by English musician Elton John that began in Allentown, Pennsylvania on 8 September 2018. It is intended to be John's final tour and will consist of more than 300 concerts worldwide.[1] By the end of the first leg of the tour on 18 March 2019, it had grossed over $125 million[2] and won a Billboard Music Award in the category Top Rock Tour.[3] The tour's name and its poster reference John's 1973 album Goodbye Yellow Brick Road. According to Pollstar, the tour has grossed $358.6 million across 179 shows.[4]

On 24 January 2018, it was announced that Elton John would be retiring from touring and would soon embark on a three-year tour. The first concert was announced to take place at the PPL Center in Allentown, Pennsylvania on 8 September 2018 followed by an extensive tour of the United States and Canada before moving on to Europe. John cited spending time with his children as the reason for his retirement. Tickets went on sale on 24 February and within hours tickets for the first 60 shows were sold out.[5]

A Winter 2020 tour taking place in the United Kingdom and Ireland was announced on 8 November 2018. The original announcement detailed sixteen concerts taking place across England, Scotland, Ireland and Northern Ireland. It was later postponed to 2021, along with the rest of the second European leg and the third North American leg, due to the ongoing COVID-19 pandemic.[8][9][10] On 15 September 2021, the European leg was postponed to 2023 after John sustained a hip injury.[11] After it was announced in January 2022 that the tour would resume, Olsson stated that the band would wear masks and have tests every two days during the tour.[12] Two shows in Dallas have been postponed after John tested positive for COVID-19 and began experiencing mild symptoms.[13][14][15]

On 30 May 2018, it was announced that Elton John had partnered with Peex to personalize the volume for fans concert experiences plus recording the show to relive.[16][17] 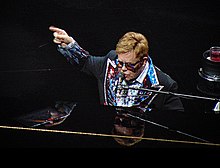 Retrieved from "http://en.turkcewiki.org/w/index.php?title=Farewell_Yellow_Brick_Road&oldid=1068370281"
This website is a mirror of Wikipedia, and is not affiliated with the Wikimedia Foundation.
Categories:
Hidden categories: