Farah Khan Kunder (born 9 January 1965)[1] is an Indian film director, film producer, actress, dancer and choreographer. Khan has choreographed dance routines for more than a hundred songs in over 80 Hindi films, winning six Filmfare Awards for Best Choreography and the National Film Award for Best Choreography. In addition, she has worked on Tamil films and also in international projects, such as Marigold: An Adventure in India, Monsoon Wedding, Bombay Dreams and the Chinese films Perhaps Love and Kung Fu Yoga, earning Tony Award and Golden Horse Award nominations. She has since become a film director as well, with nominations for the Filmfare Best Director Award for her directorial debut Main Hoon Na (2004) and her second directorial venture Om Shanti Om (2007). 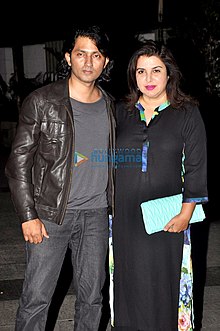 Shirish Kunder and Farah Khan in 2015

Farah Khan was born on 9 January 1965. Her father, Kamran Khan, is a stuntman-turned-filmmaker. Her mother, Menaka Irani, is the sister of former child actors Honey Irani and Daisy Irani.[2] Farah is thus a first cousin of film personalities Farhan Akhtar and Zoya Akhtar (children of Honey Irani). She has one brother, Sajid Khan, who is a comedian, actor and film director.

While Farah's father is a Muslim, her mother is a Irani Zoroastrian.[3] Their marriage broke up when Farah was still a toddler. One reason for this was religion; another was the shortage of money. Kamran Khan had initially been very successful and prosperous, so much so that, when his sister-in-law Honey Irani married a poverty-stricken poet named Javed Akhtar, the newly-weds turned to Kamran for help and he gave them an apartment to live in free of rent. However, Kamran then began losing money badly as his film ventures flopped; his marriage collapsed at the same time. Farah, therefore, saw very little of her father while growing up. Since neither parent had any money left, Farah and Sajid were shuttled between different homes.[4]

Farah Khan married Shirish Kunder, the editor of her film Main Hoon Na,[5] on 9 December 2004. They have since worked together on each other's films, such as Jaan-E-Mann, Om Shanti Om, and Tees Maar Khan. Khan gave birth to triplets — one son and two daughters — in 2008 through in vitro fertilisation.[6]

Khan was studying sociology in St. Xavier's College, Bombay when the music video of Michael Jackson's "Thriller" was released. She was so inspired, that although she hadn't danced before that, it soon became her vocation. She learned to dance basically on her own, and set up a dance group.[4] When the choreographer Saroj Khan walked out of the film Jo Jeeta Wohi Sikandar, Khan took over. This was followed by many more songs. She met actor Shahrukh Khan on the sets of Kabhi Haan Kabhi Naa and the two have since become good friends and started working together.

Khan's work in Monsoon Wedding, Bombay Dreams and Vanity Fair was nominated for a 2004 Tony Award as Best Choreographer, along with collaborator Anthony van Laast, for Bombay Dreams. She has won the Filmfare Best Choreography Award six times. Khan then went on to direct her first film Main Hoon Na starring Shahrukh Khan which was produced by Red Chillies Entertainment. Khan became the second female director to be nominated for Filmfare Best Director Award.[citation needed] As a director, her second movie Om Shanti Om Starring Shah Rukh Khan and debutant Deepika Padukone became the highest grossing Hindi film of all time at its time of release.[7] Tees Maar Khan was her next directorial release. In 2012, she made her film acting debut in a leading role in Shirin Farhad Ki Toh Nikal Padi, directed by Bela Bhansali Sehgal.

Khan trained Colombian pop star Shakira for a Bollywood version of her song Hips Don't Lie for the MTV Video Music Awards on 31 August 2006.[21] Khan has also choreographed Kylie Minogue for the song "Chiggy Wiggy" in the 2009 movie Blue.

Retrieved from "http://en.turkcewiki.org/w/index.php?title=Farah_Khan&oldid=1036159291"
This website is a mirror of Wikipedia, and is not affiliated with the Wikimedia Foundation.
Categories:
Hidden categories: