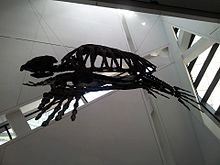 The extinction risk of climate change is the risk of species becoming extinct due to the effects of climate change. Climate change is the long-term conversion of temperature and average weather patterns.[1] Currently, 19% of species on the IUCN Red List of Threatened Species are already being impacted by climate change.[2] Many studies have been conducted on how the effect of climate change can effect global temperatures and environment. Studies done by the Intergovernmental Panel on Climate Change (IPCC) show that it is estimated that the temperature will rise from about 1.4 to 5.5 degrees Celsius (2.5 to 10 degrees Fahrenheit) within the next century.[3] Temperature rise of 1.5 °C to 2.0 °C may see the geographic range of many insects, plants and vertebrates decrease significantly.[4] Efforts like Paris Agreement attempt to reduce further warming and help ecosystems adapt the effects of a rising temperature 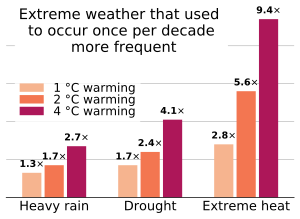 The IPCC Sixth Assessment Report (2021) projects large increases in both the frequency and intensity of extreme events, for increasing degrees of global warming.[5] 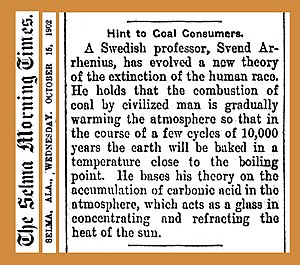 This 1902 article attributes to Swedish Nobel laureate (for chemistry) Svante Arrhenius a theory that coal combustion could eventually lead to a degree of global warming causing human extinction.[6]

The scientific consensus in the 2014 IPCC Fifth Assessment Report is that:

Some predictions of how life would be affected:

Temperature increase has affected and will continue to affect the amount of rainfall. Rain will fall in more extreme storms carrying more moisture.[9] This 'boom or bust' precipitation affects plant growth, and increasing temperature also leads to desertification. This would further spread in other issues including overgrazing and loss of biodiversity.[10]

The overall temperature of the ocean increases as a result of it absorbing most of the excess greenhouse gas emissions. When ocean temperatures rise, it affects the marine life and oceanic ecosystems. For example, increased ocean temperatures can cause coral bleaching and loss of breeding grounds for marine species. [11] Specifically, when carbon dioxide is absorbed into the ocean it forms bicarbonate and hydrogen ions. An increase in the amount of hydrogen ions is what causes ocean acidification because some marine life relies on those carbonate ions to grow their shells. Shellfish rely on the balanced pH of the ocean, if it gets more acidic than a pH of 7 (which is neutral) it could no longer be a suitable environment for sea creatures. It can be inferred that if these creatures don't have enough carbonate ions they will not be able to thrive. [12]

In one study published in Nature in 2004 found that between 15 and 37% of 1103 endemic or near-endemic known plant and animal species will be "committed to extinction" by 2050.[13] More properly, changes in habitat by 2050 will put them outside the survival range for the inhabitants, thus committing the species to extinction.

Other researchers, such as Thuiller et al.,[14] Araújo et al.,[15] Person et al.,[16] Buckley and Roughgarden,[17] and Harte et al.[18] have raised concern regarding uncertainty in Thomas et al.'s projections; some of these studies believe it is an overestimate, others believe the risk could be greater. Thomas et al. replied in Nature [19] addressing criticisms and concluding "Although further investigation is needed into each of these areas, it is unlikely to result in substantially reduced estimates of extinction. Anthropogenic climate change seems set to generate very large numbers of species-level extinctions." On the other hand, Daniel Botkin et al. state "... global estimates of extinctions due to climate change (Thomas et al. 2004) may have greatly overestimated the probability of extinction..."[20]

In 2008, the white lemuroid possum was reported to be the first known mammal species to be driven extinct by climate change. However, these reports were based on a misunderstanding. One population of these possums in the mountain forests of North Queensland is severely threatened by climate change as the animals cannot survive extended temperatures over 30 °C. However, another population 100 kilometres south remains in good health.[23]

The risk of extinction does need to lead to a demonstrable extinction process to validate future extinctions attributable to climate change. In a study led by Barry Sinervo,[24] a mathematical-biologist at the University of California Santa Cruz, researchers analyzed observed contemporary extinctions (since dramatic modern climate warming began in 1975). Results of the study indicate that climate-forced extinctions of lizard families of the world have already started. The model is premised on the ecophysiological limits of an organism being exceeded. In the case of lizards, this occurs when their preferred body temperature is exceeded in their local environment. Lizards are ectotherms that regulate body temperature using heat sources of their local environment (the sun, warm air temperatures, or warm rocks). Surveys of 200 sites in Mexico showed 24 local extinctions (= extirpations), of Sceloporus lizards. Using a model developed from these observed extinctions the researchers surveyed other extinctions around the world and found that the model predicted those observed extirpations, thus attributing the extirpations around the world to climate warming. These models predict that extinctions of the lizard species around the world will reach 20% by 2080, but up to 40% extinctions in tropical ecosystems where the lizards are closer to their ecophysiological limits than lizards in the temperate zone.[25]

According to research published in the January 4, 2012 Proceedings of the Royal Society B current climate models may be flawed because they overlook two important factors: the differences in how quickly species relocate and competition among species. According to the researchers, led by Mark C. Urban, an ecologist at the University of Connecticut, diversity decreased when they took these factors into account, and that new communities of organisms, which do not exist today, emerged. As a result, the rate of extinctions may be higher than previously projected.[26]

According to research published in the 30 May 2014 issue of Science, most known species have small ranges, and the numbers of small-ranged species are increasing quickly. They are geographically concentrated and are disproportionately likely to be threatened or already extinct. According to the research, current rates of extinction are three orders of magnitude higher than the background extinction rate, and future rates, which depend on many factors, are poised to increase. Although there has been rapid progress in developing protected areas, such efforts are not ecologically representative, nor do they optimally protect biodiversity. In the researchers' view, human activity tends to destroy critical habitats where species live, warms the planet, and tends to move species around the planet to places where they do not belong and where they can come into conflict with human needs (e.g. causing species to become pests).[27][28]

According to a long-term study of more than 60 bee species published in the journal Science said that climate change effects drastic declines in the population and diversity of bumblebees across North America and Europe. This research showed that bumblebees are disappearing at rates "consistent with a mass extinction." North America's bumblebee populations fell by 46% during the two time periods the study used, which were from 1901 to 1974 and from 2000 to 2014. North America's bumblebee populations fell by 46% because bee populations were hardest hit in warming southern regions such as Mexico. According to the study, there have been more frequent extreme warm years, which exceeded the species’ historical temperature ranges.[29]

In 2016, the Bramble Cay melomys, which lived on a Great Barrier Reef island, was reported to probably be the first mammal to become extinct because of sea level rises due to human-made climate change.[30] 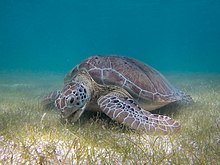 Sex ratios for sea turtles in the Caribbean are being affected because of climate change. Environmental data were collected from the annual rainfall and tide temperatures over the course of 200 years and showed an increase in air temperature (mean of 31.0 degree Celsius). These data were used to relate the decline of the sex ratios of sea turtles in the North East Caribbean and climate change. The species of sea turtles include Dermochelys coriacea, Chelonia myads, and Eretmochelys imbricata. Extinction is a risk for these species as the sex ratio is being afflicted causing a higher female to male ratio. Projections estimate the declining rate of male Chelonia myads as 2.4% hatchlings being male by 2030 and 0.4% by 2090.[32]

According to the World Wildlife Fund, the jaguar is already "near threatened" and the loss of food supplies and habitat due to the fires make the situation more critical.[33]

The fires affect water chemistry (such as decreasing the amount of dissolved oxygen in the water), temperature, and erosion rates, which in turn affects fish and mammals that depend on fish, such as the giant otter (Pteronura brasiliensis).[33]

The unprecedented fires of the 2019–20 Australian bushfire season that swept through 18 million acres (7 million hectares) claimed 29 human lives and stressed Australia's wildlife.[34] Before the fires, only 500 tiny Kangaroo Island dunnarts (Sminthopsis aitkeni) lived on one island; after half the island was burned, it is possible only one survived. Bramble Cay melomys (Melomys rubicola) became the first known casualty of human-caused climate change in 2015 due to rising sea levels and repeated storm surges; the greater stick-nest rat (Leporillus conditor) may be next.[35]

Emus (Dromaius novaehollandiae) are not in danger of total extinction, although they might suffer local extinctions as a result of bushfires; in northern New South Wales, coastal emus could be wiped out by fire .[35] The loss of 8,000 koalas (Phascolarctos cinereus) in NSW alone was significant, and the animals are endangered but not functionally extinct.[36][37]

A February 2020 study found that one-third of all plant and animal species could be extinct by 2070 as a result of climate change.[38][39]

BBC reported on a 2020 study done saying that polar bears could go extinct by 2100 if nothing is done to address climate change. Arctic sea ice has been shrinking from the warming of the planet, polar bears rely on the sea ice to hunt seals so they don't have to go on the shore. The melting of sea ice could force polar bear populations to decrease rapidly. A 2020 study measured how polar bears "endurance limits" as they continue to run out of food and prove to have a difficult time adapting to the warmer Arctic temperatures. The amount of sea ice that survives for longer than a year has been decreasing by about 13% per decade since the 1970s.[40]

Retrieved from "http://en.turkcewiki.org/w/index.php?title=Extinction_risk_from_climate_change&oldid=1067411934"
This website is a mirror of Wikipedia, and is not affiliated with the Wikimedia Foundation.
Categories:
Hidden categories: