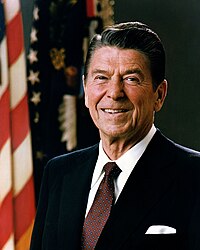 Executive Order 12333 was signed by President Ronald Reagan on December 4, 1981.

Executive Order 12333, signed on December 4, 1981 by U.S. President Ronald Reagan, was an Executive Order intended to extend powers and responsibilities of U.S. intelligence agencies and direct the leaders of U.S. federal agencies to co-operate fully with CIA requests for information.[1] This executive order was titled United States Intelligence Activities.

"Goals, Direction, Duties and Responsibilities with Respect to the National Intelligence Effort" lays out roles for various intelligence agencies, including the Departments of Defense, Energy, State, and Treasury.

Part 2.3 permits collection, retention and dissemination of the following types of information along with several others.

(i) Incidentally obtained information that may indicate involvement in activities that may violate federal, state, local or foreign laws[1]

Part 2.11 of this executive order reiterates a proscription on US intelligence agencies sponsoring or carrying out an assassination. It reads:[5]

No person employed by or acting on behalf of the United States Government shall engage in, or conspire to engage in, assassination.

Previously, EO 11905 (Gerald Ford) had banned political assassinations and EO 12036 (Jimmy Carter) had further banned indirect U.S. involvement in assassinations.[6] As early as 1998, this proscription against assassination was reinterpreted, and relaxed, for targets who are classified by the United States as connected to terrorism.[7][8]

Executive Order 12333 has been regarded by the American intelligence community as a fundamental document authorizing the expansion of data collection activities.[9] The document has been employed by the National Security Agency as legal authorization for its collection of unencrypted information flowing through the data centers of internet communications giants Google and Yahoo!.[9]

In July 2014 chairman David Medine and two other members of the Privacy and Civil Liberties Oversight Board, a government oversight agency, indicated a desire to review Executive Order 12333 in the near future, according to a report by journalist Spencer Ackerman of The Guardian.[9]

In July 2014, former State Department official John Tye published an editorial in The Washington Post, citing his prior access to classified material on intelligence-gathering activities under Executive Order 12333, and arguing that the order represented a significant threat to Americans' privacy and civil liberties.[10]

In April, 2021, the Privacy and Civil Liberties Oversight Board published the results of its six-year review of EO 12333.[11]

Retrieved from "http://en.turkcewiki.org/w/index.php?title=Executive_Order_12333&oldid=1015664077"
This website is a mirror of Wikipedia, and is not affiliated with the Wikimedia Foundation.
Categories:
Hidden categories: