Jump to navigation Jump to search
type of consumer activism

Ethical consumerism (alternatively called ethical consumption, ethical purchasing, moral purchasing, ethical sourcing, ethical shopping also associated with sustainable and green consumerism) is a type of consumer activism based on the concept of dollar voting.[1] It is practiced through the buying of ethically-made products that support small scale manufacturers and local artisans, protect animals and the environment, and boycott products that exploit children as workers, are tested on animals, or damage the environment.[2]

Although single-source ethical consumerism guides such as Ethical Consumer, Shop Ethical,[5] and The Good Shopping Guide[6] have proven to be popular, they suffer from the drawback of incomplete coverage. User-generated ethical reviews are more likely, long-term, to provide democratic, in-depth coverage of a wider range of products and businesses.[7] The Green Stars Project[8] promotes the idea of including ethical ratings (on a scale of 1-5 green stars) alongside conventional ratings on retail sites such as Amazon or review sites such as Yelp.

In the late 19th and early 20th centuries, people began to have formal consumer movements to ensure that people will get value for their money for the things they purchased in industrialised countries. These kinds of movements focused on the unfair labor practices of the companies, labelling requirements of food, cosmetics, drugs, etc. Examples of the consumer movements were Consumer League which was established in New York, USA in 1891, National Consumers League created in USA in 1898, Consumers Council which was established during World War I in Great Britain. During this time workers were neither well-paid nor did they have secure employment with benefit of social protection; similarly, working conditions were decent and the Irish Trade Union movement focused the ILO policy of campaigning for decent work wherever there was an opportunity for job improvement or job creation.[10] 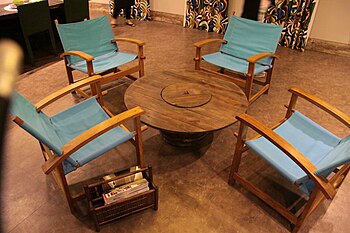 An electric wire reel reused as a center table in a Rio de Janeiro decoration fair. When consumers choose and reuse environmentally friendly material like this, they are practicing ethical consumerism.

In Unequal Freedoms: The Global Market As An Ethical System (1998), John McMurtry argues that no purchasing decision exists that does not itself imply some moral choice, and that there is no purchasing that is not ultimately moral in nature. This mirrors older arguments, especially by the Anabaptists, e.g. Mennonites, Amish, that one must accept all personal moral and spiritual liability of all harms done at any distance in space or time to anyone by one's own choices. It is often suggested that Judeo-Christian scriptures further direct followers towards practising good stewardship of the Earth, under an obligation to a God who is believed to have created the planet for us to share with other creatures. A similar argument presented from a secular humanist point of view is that it is simply better for human beings to acknowledge that the planet supports life only because of a delicate balance of many different factors.

Some trust criteria, e.g. creditworthiness or implied warranty, are considered to be part of any purchasing or sourcing decision. However, these terms refer to broader systems of guidance that would, ideally, cause any purchasing decision to disqualify offered products or services based on non-price criteria that affect the moral rather than the functional liabilities of the entire production process. Paul Hawken, a proponent of natural capitalism, refers to "comprehensive outcomes" of production services as opposed to the "culminative outcomes" of using the product of such services.[citation needed] Often, moral criteria are part of a much broader shift away from commodity markets towards a deeper service economy where all activities, from growing to harvesting to processing to delivery, are considered part of the value chain and for which consumers are "responsible".

Andrew Wilson, Director of the UK's Ashridge Centre for Business and Society, argues that "Shopping is more important than voting", and that the disposition of money is the most basic role we play in any system of economics.[11] Some theorists believe that it is the clearest way that we express our actual moral choices, i.e., if we say we care about something but continue to buy from parties that have a high probability of risk of harm or destruction of that thing, we don't really care about it, we are practising a form of simple hypocrisy.

In an effort by churches to advocate moral and ethical consumerism, many have become involved in the Fair Trade movement:

A number of standards, labels and marks have been introduced for ethical consumers, such as the following:

Along with disclosure of ingredients, some mandatory labelling of origins of clothing or food is required in all developed nations. This practice has been extended in some developing nations, e.g., where every item carries the name, phone number and fax number of the factory where it was made so a buyer can inspect its conditions. And, more importantly, to prove that the item was not made by "prison labor", use of which to produce export goods is banned in most developed nations. Such labels have also been used for boycotts, as when the merchandise mark Made in Germany was introduced in 1887.

These labels serve as tokens of some reliable validation process, some instructional capital,[19] much as does a brand name or a nation's flag. They also signal some social capital, or trust, in some community of auditors that must follow those instructions to validate those labels. 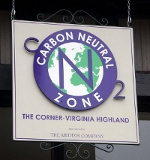 Some companies in the United States, though currently not required to reduce their carbon footprint, are doing so voluntarily by changing their energy use practices, as well as by directly funding (through carbon offsets), businesses that are already sustainable—or are developing or improving green technologies for the future.

In 2009, Atlanta's Virginia-Highland neighborhood became the first Carbon-Neutral Zone in the United States. Seventeen merchants in Virginia-Highland allowed their carbon footprint to be audited. Now, they are partnered with the Valley Wood Carbon Sequestration Project—thousands of acres of forest in rural Georgia—through the Chicago Climate Exchange (CCX).[20][21] The businesses involved in the partnership display the Verus Carbon Neutral seal in each store front and posted a sign prominently declaring the area's Carbon Neutral status. (CCX ceased trading carbon credits at the end of 2010 due to inactivity in the U.S. carbon markets,[22] although carbon exchanges were intended to still be facilitated.)[23][24]

Over time, some[who?] theorists suggest, the amount of social capital or trust invested in nation-states (or "flags") will continue to decrease, and that placed in corporations (or "brands") will increase. This can only be offset by retrenched national sovereignty to reinforce shared national standards in tax, trade, and tariff laws, and by placing the trust in civil society in such "moral labels". These arguments have been a major focus of the anti-globalization movement, which includes many broader arguments against the amoral nature of markets as such. However, the economic school of Public Choice Theory pioneered by James M. Buchanan has offered counter-arguments based on an economic demonstration to this theory of "amoral markets" versus "moral governments".

Ethical Consumer Research Association, an alternative consumer organisation, collects and categorises information of more than 30,000 companies according to their performance in five main areas, composing the Ethiscore:

GfK NOP, the market research group, has made a five-country study of consumer beliefs about the ethics of large companies. The report was described in a Financial Times article published on February 20, 2007, entitled "Ethical consumption makes mark on branding",[dead link][26] and was followed up by an online debate/discussion hosted by FT.com.[27] The countries surveyed were Germany, the United States, Britain, France and Spain. More than half of respondents in Germany and the US believed there is a serious deterioration in standards of corporate practice. Almost half of those surveyed in Britain, France and Spain held similar beliefs.

About a third of respondents told researchers they would pay higher prices for ethical brands, though the perception of various companies' ethical or unethical status varied considerably from country to country.

In the UK, The Co-operative Bank has produced an Ethical Consumerism Report[28] (formerly the Ethical Purchasing Index) since 2001. The report measures the market size and growth of a basket of 'ethical' products and services, and valued UK ethical consumerism at GBP36.0 billion (~USD54.4 billion) in 2008, and GBP47.2 billion (USD72.5 billion) in 2012.

A number of organisations provide research-based evaluations of the behavior of companies around the world, assessing them along ethical dimensions such as human rights, the environment, animal welfare and politics. Green America is a not-for-profit membership organization founded in 1982 that provides the Green American Seal of Approval and produces a "Responsible Shopper" guide to "alert consumers and investors to problems with companies that they may shop with or invest in."[29] The Ethical Consumer Research Association is a not-for-profit workers' co-operative founded in the UK in 1988 to "provide information on the companies behind the brand names and to promote the ethical use of consumer power"[30] which provides an online searchable database under the name Corporate Critic[31] or Ethiscore.[32] The Ethiscore is a weightable numerical rating designed as a quick guide to the ethical status of companies, or brands in a particular area, and is linked to a more detailed ethical assessment. "alonovo" is an online shopping portal that provides similar weightable ethical ratings termed the "Corporate Social Behavior Index".[33]

The consumer rationalizes unnecessary and even unwanted consumption by saying that "it's for a good cause".[34] As a result, the consumer buys pink ribbons during National Breast Cancer Awareness Month, green products to support the environment, candy and popcorn from school children, greeting cards and gift wrap from charities, and many other, often unwanted objects. The consumer avoids considering whether the price offered is fair, whether a small cash donation would be more effective with far less work, or even whether selling the item is consistent with the ostensible mission, such as when sports teams sell candy.

Some of these efforts are based on concept brands: the consumer is buying an association with women's health or environmental concerns as much as she or he is buying a tangible product.[34]

In response to an increasing demand for ethical consumerism surrounding gift-giving occasions, charities have promoted an alternative gift market, in which charitable contributions are made on behalf of the gift "recipient". The "recipient" receives a card explaining the selected gift, while the actual gift item (frequently agricultural supplies or domestic animals) is sent to a family in a poor community.[35]

Critics argue that the ability to affect structural change is limited with ethical consumerism. Some cite the preponderance of niche markets as the actual effect of ethical consumerism,[36] while others argue that information is limited regarding the outcomes of a given purchase, preventing consumers from making informed ethical choices.[citation needed] Critics have also argued that the uneven distribution of wealth prevents consumerism, ethical or otherwise, from fulfilling its democratic potential.[37]

One study suggests that "Buying Green" serves as a license for unethical behavior – in their 2009 paper, "Do Green Products Make Us Better People?",[38] Nina Mazar and Chen-Bo Zhong state the following:

In line with the halo associated with green consumerism, people act more altruistically after mere exposure to green than conventional products. However, people act less altruistically and are more likely to cheat and steal after purchasing green products as opposed to conventional products. Together, the studies show that consumption is more tightly connected to our social and ethical behaviors in directions and domains other than previously thought.

In a 2010 The Guardian article, British environmental writer and activist George Monbiot argued that green consumers who do not articulate their values are part of "a catastrophic mistake" on the grounds that such consumerism "strengthens extrinsic values" (those that "concern status and self-advancement"), thereby "making future campaigns less likely to succeed".[39]

Retrieved from "http://en.turkcewiki.org/w/index.php?title=Ethical_consumerism&oldid=1017644863"
This website is a mirror of Wikipedia, and is not affiliated with the Wikimedia Foundation.
Categories:
Hidden categories: