Escaramuza charra is the only female equestrian event in the Mexican charrería. The escaramuza means "skirmish" and consists of a team riding horses in choreographed synchronized maneuvers to music.[1][2][3] The women ride side-saddle and wear traditional Mexican outfit that include sombreros, dresses, and matching accessories. A team consists of 16 women, but only 8 ride at a time.[4] The routine is practiced in a lienzo, or a circular arena.[1]

The escaramuza season runs from February to November. The U.S. nationals are held on Labor Day weekend, while the grand finales are held in Mexico that brings together over 80 teams from both sides of the border. 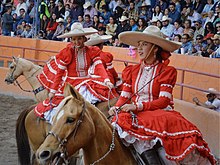 Charras after the ride

The sport was inspired "by the Mexican adelitas, who fought in the Mexican Revolution."[4][1] Although charrería is Mexico's national sport, there are charro and escaramuza teams in the United States and Canada.

Typically, rodeo families pass the charro tradition on from father to son, but also have started getting women involved.

Retrieved from "http://en.turkcewiki.org/w/index.php?title=Escaramuza_charra&oldid=1074367061"
This website is a mirror of Wikipedia, and is not affiliated with the Wikimedia Foundation.
Categories: