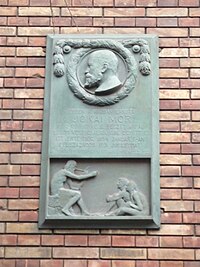 Historical marker on the Feszty-Jókai Palace

Epreskert Art Colony (Hungarian: Epreskerti művésztelep; the name means "Mulberry Garden" in Hungarian) was an artists' colony in Budapest in the last decades of the 19th and the first half of the 20th century. Among the artists who worked and lived there the most important were sculptors György Zala and Adolf Huszár, and painter Árpád Feszty.

The artists' colony was located in the Terézváros district of Budapest (District VI.) in the area of the former Epreskert garden. The colony occupied an oblong shaped block bounded by Bajza, Lendvay, Epreskert (after 1900 Munkácsy Mihály) and Kmety Street. In 1886 the block was divided into ten lots for ateliers. The Hungarian Academy of Fine Arts (now Hungarian University of Fine Arts) established its campus on the other side of Kmety Street.

The Epreskert was a municipal garden of mulberry trees on the outskirts of Pest which remained in agricultural usage until the 1870s. After the opening of Andrássy Avenue in 1871 the commercial value of the plot went up and urbanization began. In 1879 the municipal council donated a parcel on the corner of Bajza and Lendvay Streets to Adolf Huszár, a renowned sculptor who worked on prestigious municipal projects but was in need of a suitable workshop. Two years later Huszár built an atelier in fashionable Neo-Renaissance style and became the first artist to live there.

The garden was divided into two by the opening of a new street (called Kmety Street) in 1883. The Hungarian Academy of Fine Arts established its campus on the northern parcel. The southern city block was intended to become an artists' colony. Many famous artists applied for lots but the municipal council was slow to make decisions. The block was divided into nine plots (the tenth was Huszárs' property). In the first round only one plot was apportioned to painter Gyula Aggházy who built a house on the corner of Epreskert and Kmety Streets in 1884.

In 1886 three plots in Lendvay Street were leased by the municipality to sculptors György Zala, Gyula Donáth and Antal Szécsi. Kmety Street became the painter's row in 1890 when three plots were leased to Árpád Feszty, Ida Konek and Béla Pállik. Good political connections played a larger part in the decision than artistic merits.

Two neighbouring plots on 31-33 Kmety Street remained empty. The parcel was used by the municipality as storage place for cobble stones from 1897 until 1910 when it was sold for a private villa.

The colony flourished in the last decade of the 19th century. Rising property prices in the first decade of the 20th century caused a strong demand for plots suitable for building private villas. After the artists died or moved elsewhere the municipality sold their plots to developers. In 1914 there were only three ateliers in the former colony compared to five private villas, one cultural institution and one empty plot. The artists' colony practically ceased to exist but one atelier survived even after the second world war.

During the siege of Budapest the city block was seriously damaged. After the war many of ruined buildings were demolished and the plots on Lendvay Street (the former sculptor's row) were acquired by the Soviet authorities. Now this part of the block is used as an extension and garden of the Russian Embassy in Budapest. 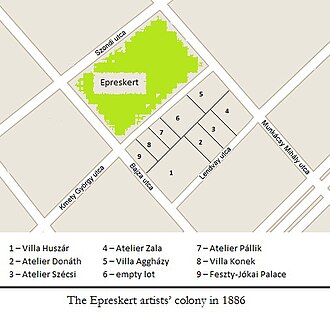 There were three other ateliers in the Epreskert academy campus nearby which belonged to painters Gyula Benczúr and Károly Lotz, and sculptor Alajos Stróbl. The studios were places of work and teaching but strictly speaking they were not part of the artists' colony.

The most important house in the Epreskert artists' colony was the small palace of the Feszty-Jókai family. Árpád Feszty, creator of the famous Feszty Cyclorama acquired the parcel on the corner of Bajza and Kmety Streets in 1890. He built a small palace in Venetian Gothic style according to his own plans. The façade was decorated with reliefs by Gyula Donáth and György Zala (both artists lived in the colony) together with the coat-of-arms of the Feszty and Jókai families. Feszti had a two storeys high studio.

The celebrated writer, Mór Jókai was stepfather of Feszty's wife, Róza Jókai. He was a widower who chose to live with the young couple. Jókai occupied the upper floor while the Fesztys lived downstairs. Róza Jókai's salon soon became the center of the artistic and social life of Budapest. Ministers, politicians, actors and actresses, curators, writers and painters gathered regularly in the small Venetian palace on Bajza Street. From the older generation Kálmán Tisza and Kálmán Mikszáth were regular visitors at Jókai upstairs. In 1894 Jókai celebrated his golden jubilee as an author in the palace.

The golden era of the palace ended with the biggest social scandal of the decade. In 1899 the 74-year-old Jókai suddenly married a young actress, Bella Nagy. The public and the Fesztys were equally shocked. Jókai left the palace and the family got mixed up in a public debate. In the next few years Feszty ran into a huge debt and was forced to sell the house in 1907.

The palace was bought by the Petőfi Literary Society, which converted it into a literary museum (forerunner of the current Petőfi Museum of Literature). It was damaged in World War II but was rebuilt in 1947. After the museum moved out the palace was converted into storage place for a natural history collection, and later an atelier for sculptor Pál Kő in the 1990s.

Retrieved from "http://en.turkcewiki.org/w/index.php?title=Epreskert_Art_Colony&oldid=984320816"
This website is a mirror of Wikipedia, and is not affiliated with the Wikimedia Foundation.
Categories:
Hidden categories: