Jump to navigation Jump to search
Occult or angelic language
This article is about the mystical language recorded in the journals of John Dee. For Dee's system of angel magic, see Enochian magic. For other examples of divine or angelic languages, see Divine language.

Enochian (/ɪˈnoʊkiən/ ə-NOH-kee-ən) is an occult constructed language[3] — said by its originators to have been received from angels — recorded in the private journals of John Dee and his colleague Edward Kelley in late 16th-century England.[4] Kelley was a scryer who worked with Dee in his magical investigations. The language is integral to the practice of Enochian magic.

The language found in Dee's and Kelley's journals encompasses a limited textual corpus. Linguist Donald Laycock, an Australian Skeptic, studied the Enochian journals, and argues against any extraordinary features. The untranslated texts of the Liber Loagaeth manuscript recall the patterns of glossolalia rather than true language. Dee did not distinguish the Liber Loagaeth material from the translated language of the Calls, which is more like an artificial language. This language was called Angelical by Dee and later came to be referred to as 'Enochian' by subsequent writers. The phonology and grammar resemble English, though the translations are not sufficient to work out any regular morphology.[5] Some Enochian words resemble words and proper names in the Bible, but most have no apparent etymology.[6]

Dee's journals also refer to this language as "Celestial Speech", "First Language of God-Christ", "Holy Language", or "Language of Angels". He also referred to it as "Adamical" because, according to Dee's angels, it was used by Adam in Paradise to name all things. The term "Enochian" comes from Dee's assertion that the Biblical patriarch Enoch had been the last human (before Dee and Kelley) to know the language. 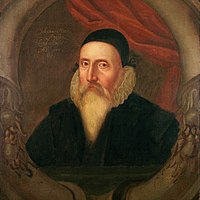 John Dee (pictured) recorded the Enochian corpus in his journals with the assistance of Edward Kelley as his scryer and collaborator.

According to Tobias Churton in his text The Golden Builders,[7] the concept of an Angelic or antediluvian language was common during Dee's time. If one could speak the language of angels, it was believed one could directly interact with them.

In 1581, Dee mentioned in his personal journals that God had sent "good angels" to communicate directly with prophets. In 1582, Dee teamed up with the seer Edward Kelley, although Dee had used several other seers previously.[8] With Kelley's help as a scryer, Dee set out to establish lasting contact with the angels. Their work resulted, among other things, in the reception of Angelical, now more commonly known as Enochian.[9]

The reception started on March 26, 1583, when Kelley reported visions in the crystal of a 21 lettered alphabet. A few days later, Kelley started receiving what became the book Liber Loagaeth ("Book [of] Speech from God"). The book consists of 49 great letter tables, or squares made of 49 by 49 letters (however each table has a front and a back side, making 98 tables of 49×49 letters altogether).[a] Dee and Kelley said the angels never translated the texts in this book.[citation needed]

About a year later, at the court of King Stephen Báthory in Kraków, where both alchemists stayed for some time, another set of texts was reportedly received through Kelley.[citation needed] These texts comprise 48 poetic verses with English translations, which in Dee's manuscripts are called Claves Angelicae, or Angelic Keys. Dee was apparently intending to use these Keys to open the "Gates of Understanding"[10] represented by the magic squares in Liber Loagaeth:

I am therefore to instruct and inform you, according to your Doctrine delivered, which is contained in 49 Tables. In 49 voices, or callings: which are the Natural Keys to open those, not 49 but 48 (for one is not to be opened) Gates of Understanding, whereby you shall have knowledge to move every Gate...[11]

But you shall understand that these 19 Calls are the Calls, or entrances into the knowledge of the mystical Tables. Every Table containing one whole leaf, whereunto you need no other circumstances.[12]

The language was recorded primarily in Latin script, however, individual words written in Enochian script "appear sporadically throughout the manuscripts".[13] There are 21 letters in the script; one letter appears with or without a diacritic dot. Dee mapped these letters of the "Adamical alphabet" onto 22 of the letters of the English alphabet, treating U and V as positional variants (as was common at the time) and omitting the English letters J, K, and W.[b] The Enochian script is written from right to left in John Dee's diary.[14] Different documents have slightly different forms of the script. The alphabet also shares many graphical similarities to a script, also attributed to the prophet Enoch, that appeared in the Voarchadumia Contra Alchimiam of Johannes Pantheus,[15] a copy of which Dee is known to have owned.[13]

The phonology of Enochian is "thoroughly English", apart from a few difficult sequences such as bdrios, excolphabmartbh, longamphlg, lapch, etc.[16] Similarly, Enochian orthography closely follows Early Modern English orthography, for example in having soft and hard ⟨c⟩ and ⟨g⟩, and in using digraphs ⟨ch⟩, ⟨ph⟩, ⟨sh⟩, and ⟨th⟩ for the sounds /tʃ ~ k/, /f/, /ʃ/, and /θ/.[17] Laycock mapped Enochian orthography to its sound system and says, "the resulting pronunciation makes it sound much more like English than it looks at first sight".[18][c] Modern pronunciation conventions vary, depending on the affiliations of the practitioner.[d]

The Enochian letters, with their letter names and English equivalents as given by Dee, and pronunciations as reconstructed by Laycock, are as follows:[b]

A number of fonts for the Enochian script are available. They use the ASCII range, with the letters assigned to the codepoints of their English equivalents.[21][22][23][24]

The grammar is for the most part without articles or prepositions.[5][25] Adjectives are quite rare.[26] Aaron Leitch identifies several affixes in Enochian, including -o (indicating 'of') and -ax (which functions like -ing in English).[27] Leitch observes that, unlike English, Enochian appears to have a vocative case, citing Dee's note in the margin of the First Table of Loagaeth[28] – "Befes the vocative case of Befafes".[29]

Compounds are frequent in the Enochian corpus. Modifiers and indicators are typically compounded with the nouns and verbs modified or indicated. These compounds can occur with demonstrative pronouns and conjunctions, as well as with various forms of the verb 'to be'. The compounding of nouns with adjectives or other verbs is less common. Compounds may exhibit variant spellings of the words combined.[30]

Conjugation can result in spelling changes which can appear to be random or haphazard. Due to this, Aaron Leitch has expressed doubt as to whether Enochian actually has conjugations.[31] The very scant evidence of Enochian verb conjugation seems quite reminiscent of English, including the verb 'to be' which is highly irregular.[5]

Laycock reports that the largest number of forms are recorded for 'be' and for goh- 'say':[5]

Note that christeos 'let there be' might be from 'Christ', and if so is not part of a conjugation.[6]

While Enochian does have personal pronouns, they are rare and used in ways that can be difficult to understand. Relative possessive pronouns do exist but are used sparingly.[26]

Word order closely follows English, except for the dearth of articles and prepositions.[5] Adjectives, although rare, typically precede the noun as in English.[26]

Laycock notes that there are about 250 different words in the corpus of Enochian texts, more than half of which occur only once. A few resemble words in the Bible – mostly proper names – in both sound and meaning. For example, luciftias "brightness" resembles Lucifer "the light-bearer"; babalond "wicked, harlot" resembles Babylon.[6] Leitch notes a number of root words in Enochian. He lists Doh, I, Ia, Iad,[clarification needed] among others, as likely root words.[34][what do they mean?] While the Angelic Keys contain most of the known vocabulary of Enochian, dozens of further words are found throughout Dee's journals.

Thousands of additional, undefined words are contained in the Liber Loagaeth. Laycock notes that the material in Liber Loagaeth appears to be different from the language of the 'Calls' found in the Angelic Keys, which appear to have been generated from the tables and squares of the Loagaeth.[5] According to Laycock:

The texts in the Loagaeth show patterning "characteristically found in certain types of meaningless language (such as glossolalia), which is often produced under conditions similar to trance. In other words, Kelley may have been 'speaking in tongues'. [...] there is no evidence that these early invocations are any form of 'language' [...] at all.[35]

Relation to other languages[edit]

Dee believed Enochian to be the Adamic language universally spoken before the confusion of tongues, however, modern analysts view Enochian as an English-like constructed language.[3] Word order closely follows English, except for the dearth of articles and prepositions.[5] The very scant evidence of Enochian verb conjugation is likewise reminiscent of English, more so than with Semitic languages as Hebrew or Arabic, which Dee said were debased versions of the Enochian language.[5]

Retrieved from "http://en.turkcewiki.org/w/index.php?title=Enochian&oldid=1106452334"
This website is a mirror of Wikipedia, and is not affiliated with the Wikimedia Foundation.
Categories:
Hidden categories: