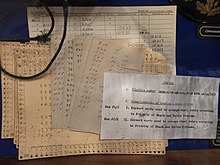 Edge-notched cards or edge-punched cards are a system used to store a small amount of binary or logical data on paper index cards, encoded via the presence or absence of notches in the edges of the cards.[1] The notches allowed efficient sorting and selecting of specific cards matching multiple desired criteria, from a larger number of cards in a paper-based database of information. In the mid-20th century they were sold under names such as Cope-Chat cards, E-Z Sort cards, McBee Keysort,[2] and Indecks cards.[3] 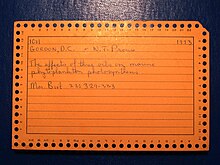 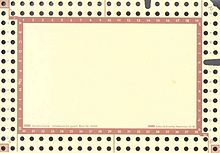 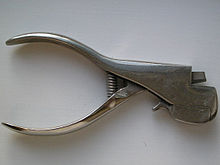 Edge-notched cards are a manual data storage and manipulation technology used for specialized data storage and cataloging applications through much of the 20th century. An early instance of something like this methodology appeared in 1904.[4] While there were many variants, by the mid-20th century a popular version consisted of 5-by-8-inch (13 by 20 cm) paperboard cards with holes punched at regular intervals along all four edges, a short distance in from the edges. The center of the card might be blank space for information to be written, or contain a pre-printed form, or contain a microform image in the case of edge-notched aperture cards.[5][6]

To record data, the paper stock between a hole and the nearest edge was removed by a special notching tool. The holes were assigned a meaning dependent upon a particular application. For example, one hole might record the answer to a yes/no question on a survey, with the presence of a notch meaning "yes". More-complex data was encoded using a variety of schemes, often using a superimposed code which allows more distinct categories to be coded than the number of holes available.

To allow a visual check that all cards in a deck were oriented the same way, one corner of each card was beveled, much like Hollerith punched cards. Edge-notched cards, however, were not intended to be read by machines such as IBM card sorters. Instead, they were manipulated by passing one or more slim needles through selected holes in a group of cards. As the needles were lifted, the cards that were notched in the hole positions where the needles were inserted would be left behind as rest of the deck was lifted by the needles. Using two or more needles produced a logical and function. Combining the cards from two different selections produced a logical or. Quite complex manipulations, including sorting were possible using these techniques.

Before the widespread use of computers, some public libraries used a system of small edge-notched cards in paper pockets in the back of library books to keep track of them.[7][8] Edge-notched cards were used for course scheduling in some high schools and colleges during the same era.[9]

The corporate library of a division of E. I. du Pont de Nemours and Company maintained a subject catalog on two-level edge-punched cards (Royal-McBee Keysort cards) that grew to 15,000 cards before the librarians began to consider keeping the catalog on a computer.[10]

Notched cards were used in the preparation of The Last Whole Earth Catalog in the 1970s.[3]

Needle cards (another term for edge-notched cards) are index cards with text, written by hand or typewriter, that have a line of prepunched holes along one or more sides. By cutting or punching away (notching out) the paper between a hole and the edge of the card, the card is associated with a category. By putting long knitting needles through certain holes in a deck of such cards, lifting and shaking gently, cards that belong to a combination of categories can be selected. This tool is less useful for data sets larger than 10,000 records.[11]

Affectionately referred to as "The Knitting Needle Computer", these database-like systems were popular sometime in the 1960s and 1970s. Science teachers may still use these as a teaching tool for relational databases. Indexed card systems can be made with index cards and a hole punch.

In her book Parti-colored Blocks for a Quilt, writer Marge Piercy described how she used needle cards instead of a notebook:

I keep neither a journal nor a notebook. I have a memory annex which serves my purposes. It uses edge-notched cards. Edge-notched cards are cards which have holes around the borders as opposed to machine punch cards which are punched through the body. The cards are sorted with knitting needles. I have a nice sophisticated system which I call the "General Practitioner."[12]

Retrieved from "http://en.turkcewiki.org/w/index.php?title=Edge-notched_card&oldid=1043939928"
This website is a mirror of Wikipedia, and is not affiliated with the Wikimedia Foundation.
Categories:
Hidden categories: