Jump to navigation Jump to search
For the family name, see Dolgan (surname). 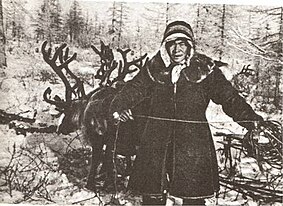 Dolgans (Russian: долганы; self-designation: долган, тыа-киһи, батва (саха)) are an ethnic group who mostly inhabit Krasnoyarsk Krai, Russia. They are descended from several groups, particularly Evenks,[2] one of the indigenous peoples of the Russian North. They adopted a Turkic language sometime after the 18th century.[2] The 2010 Census counted 7,885 Dolgans. This number includes 5,517 in former Taymyr Autonomous Okrug. There are 26 Dolgans in Ukraine, four of whom speak Dolgan (2001 Ukrainian Census).[citation needed]

Dolgans speak the Dolgan language,[3] which is closely related to the Yakut language.[2] 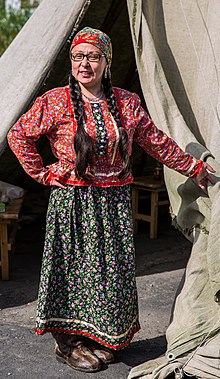 The Dolgans are considered a Turkified Tungusic people. In the 17th century, the Dolgans lived in the basins of the Olenyok River and Lena River. They moved to their current location, Taymyr, in the 18th century.[4] The Dolgan identity began to emerge during the 19th and early 20th centuries, under the influence of three groups who migrated to the Krasnoyarsk area from the Lena River and Olenyok River region: Evenks, Yakuts, Enets, and so-called tundra peasants (зату́ндренные крестья́не zatúndrennye krest’jáne, literally "tundranized peasants").

Originally, the Dolgans were nomadic hunters and reindeer herders. However, they were prevented from following a nomadic lifestyle during the Soviet era and required to form kolkhozy (rural collectives) that – in addition to their traditional activities – engaged in reindeer breeding, fishing, dairy farming and market gardening. In 1983, the anthropologist Shirin Akiner claimed: "Dolgans enjoy full Soviet citizenship. They are found in all occupations, though the majority are peasants and collective farm workers. Their standard of housing is comparable to that of other national groups in the Soviet Union."[4]

Most Dolgans practise old shamanistic beliefs; however, most are influenced by Eastern Orthodox Christianity.

Retrieved from "http://en.turkcewiki.org/w/index.php?title=Dolgans&oldid=1032091390"
This website is a mirror of Wikipedia, and is not affiliated with the Wikimedia Foundation.
Categories:
Hidden categories: