David W. Harvey FBA (born 31 October 1935) is a British-born Marxist economic geographer, podcaster and Distinguished Professor of anthropology and geography at the Graduate Center of the City University of New York (CUNY). He received his PhD in geography from the University of Cambridge in 1961. Harvey has authored many books and essays that have been prominent in the development of modern geography as a discipline. He is a proponent of the idea of the right to the city.

In 2007, Harvey was listed as the 18th most-cited author of books in the humanities and social sciences in that year, as established by counting citations from academic journals in the Thomson Reuters ISI database.[1] 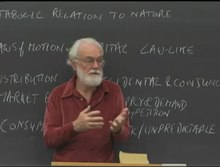 David W. Harvey was born in 1935 in Gillingham, Kent.[2][3] He attended Gillingham Grammar School for Boys and St John's College, Cambridge (for both his undergraduate and post-graduate studies). Harvey's early work, beginning with his PhD (on hops production in 19th century Kent), was historical in nature, emerging from a regional-historical tradition of inquiry widely used at Cambridge and in Britain at that time. Historical inquiry runs through his later works (for example on Paris).[citation needed]

By the mid-1960s, Harvey followed trends in the social sciences to employ quantitative methods, contributing to spatial science and positivist theory. Roots of this work were visible while he was at Cambridge: the Department of Geography also housed Richard Chorley, and Peter Haggett. His Explanation in Geography (1969) was a landmark text in the methodology and philosophy of geography, applying principles drawn from the philosophy of science in general to the field of geographical knowledge. But after its publication Harvey moved on again, to become concerned with issues of social injustice and the nature of the capitalist system itself. He has never returned to embrace the arguments made in Explanation, but still he conforms to the critique of absolute space and exceptionalism in geography of the regional-historical tradition that he saw as an outcome of Kantian synthetic a priori knowledge.[citation needed]

Moving from Bristol University to Johns Hopkins University in Baltimore in the US, he positioned himself centrally in the newly emerging field of radical and Marxist geography. Injustice, racism, and exploitation were visible in Baltimore, and activism around these issues was tangible in early 1970s East Coast, perhaps more so than in Britain. The journal Antipode was formed at Clark University; Harvey was one of the first contributors. The Boston Association of American Geographers meetings in 1971 were a landmark, with Harvey and others disrupting the traditional approach of their peers.[5] In 1972, in a famous essay on ghetto formation, he argued for the creation of "revolutionary theory", theory "validated through revolutionary practice".[citation needed]

One of the most important subfields impacted by the rise of Marxist geography was in urban geography. Harvey established himself as the leader of this subfield with the publication of Social Justice and the City (1973). Harvey argued in this book that geography could not remain 'objective' in the face of urban poverty and associated ills.[6] It makes a significant contribution to Marxian theory by arguing that capitalism annihilates space to ensure its own reproduction.

1980s consolidation of Marxist geography and materialist critique of postmodernism[edit]

Dialectical materialism has guided his subsequent work, notably the theoretically sophisticated Limits to Capital (1982), which furthers the radical geographical analysis of capitalism, and several books on urban processes and urban life have followed it. In ‘Limits to Capital’ Harvey expanded and innovated Marxist theory with respect to the functioning of money and finance, and the ‘spatial moment’ in the unfolding of capitalist crisis formation.[7] The Condition of Postmodernity (1989), written while a Professor at Oxford, was a best-seller (the London The Independent named it as one of the fifty most important works of non-fiction to be published since 1945, and it is cited 30,000 times by 2017). It is a materialist critique of postmodern ideas and arguments, suggesting these actually emerge from contradictions within capitalism itself. Justice, Nature and the Geography of Difference (1996) focuses on social and environmental justice (although its dialectical perspective has attracted the ire of some Greens). Spaces of Hope (2000) has a utopian theme and indulges in speculative thinking about how an alternative world might look.

His study of Second Empire Paris and the events surrounding the Paris Commune in Paris, Capital of Modernity, is undoubtedly his most elaborated historical-geographical work. The onset of US military action since 2001 has provoked a blistering critique – in The New Imperialism (2003) he argues that the war in Iraq allows US neo-conservatives to divert attention from the failures of capitalism 'at home'. His next work, A Brief History of Neoliberalism (2005), provides an historical examination of the theory and divergent practices of neoliberalism since the mid-1970s. This work conceptualises the neoliberalised global political economy as a system that benefits few at the expense of many, and which has resulted in the (re)creation of class distinction through what Harvey calls "accumulation by dispossession". His book The Enigma of Capital (2010) takes a long view of the contemporary economic crisis. Harvey explains how capitalism came to dominate the world and why it resulted in the financial crisis. He describes that the essence of capitalism is its amorality and lawlessness and to talk of a regulated, ethical capitalism is to make a fundamental error.[8] A series of events linked to this book across London academic forums, such as the LSE, proved hugely popular[quantify] and sparked a new interest in Harvey's work.[citation needed]

Harvey returned to Johns Hopkins from Oxford in 1993, but spent increasing time elsewhere as a speaker and visitor, notably as a salaried Miliband Fellow at the London School of Economics in the late 1990s. In 1996, he delivered the Ellen Churchill Semple lecture at UK Geography.[9] He moved to the City University of New York in 2001 as a Distinguished Professor, now residing in its Department of Anthropology. He has spent most of his academic career in Anglo-America, with brief sojourns in France and a range of foreign visiting appointments (currently as acting Advisory Professor at Tongji University in Shanghai). He has supervised many PhD students. Several of these, such as Neil Smith, Richard Walker, Erik Swyngedouw, Michael Johns, Maarten Hajer, Patrick Bond, Melissa Wright, and Greg Ruiters now hold or held important academic positions themselves. In 2013 Harvey was asked by the Republic of Ecuador to help set up the National Strategic Center for the Right to the Territory (CENEDET),[10] which he directed with the urbanist Miguel Robles-Durán until its alleged forced closure in 2017.

Critical response to Harvey's work has been sustained. In the early years, there was competition between Harvey and proponents of quantitative and non-politicized geography, notably Brian Berry. A recent critical appraisal (Castree & Gregory, 2006) explores some critiques of Harvey in detail.

Two constants in Harvey's life and work have been teaching a course on Marx's Capital[11] and his support for student activism and community and labour movements (notably in Baltimore). His course was put into a YouTube lecture series,[12] which gained immense popularity and resulted in two companion books for the two volumes of Marx's Capital.[13]

David Harvey is widely recognized as a foundational scholar in urban geography.[14] Harvey's books have been widely translated. He holds honorary doctorates from Roskilde (Denmark), Buenos Aires (Argentina), the Faculty of Social Sciences at Uppsala University[15] (Sweden), Ohio State University (USA), Lund University (Sweden), the University of the Republic[16] (Uruguay) and the University of Kent (UK). Among other awards he has received the Anders Retzius Gold Medal of the Swedish Society for Anthropology and Geography, the Patron's Medal of the Royal Geographical Society and the Vautrin Lud International Prize in Geography (France). He was made a fellow of the British Academy in 1998, and was elected to the American Academy of Arts and Sciences in 2007. He is a member of the Interim Committee for the emerging International Organization for a Participatory Society.[17]

Retrieved from "http://en.turkcewiki.org/w/index.php?title=David_Harvey&oldid=1021231099"
This website is a mirror of Wikipedia, and is not affiliated with the Wikimedia Foundation.
Categories:
Hidden categories: