Cumberland County is a county located in the U.S. state of Tennessee. As of the 2010 census, the population was 56,053.[3] Its county seat is Crossville.[4] Cumberland County comprises the Crossville, TN micropolitan statistical area.[5]

In 1787, the North Carolina legislature ordered widening and improvements to Avery's Trace, the trail that ran from North Carolina through Knoxville and what is now Cumberland County to Nashville. They raised funds by a lottery and completed a project that built a wagon road. This slightly improved travel, but still required a bone jarring trip. The road was often muddy and crossed stone slabs so that it was only passable in some places on foot. Reportedly wagons could not get down the steep grade at Spencer's Mountain without locking brakes on all wheels and dragging a tree behind to slow the descent. The mountain top was described as "quite denuded of trees." 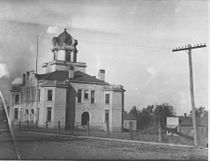 Cumberland County was the site of an important saltpeter mine. Saltpeter is the main ingredient of gunpowder and was obtained by leaching the earth from Grassy Cove Saltpeter Cave. Richard Green Waterhouse settled in this area in 1800. In his "Diary, Journal, and Memoirs" he states that he went with William Kelly into Grassy cove and explored his (Kelly's) saltpeter cave on October 7, 1812.[7]

According to Barr (1961), Dicky Mathews began the manufacture of gunpowder at the cave in 1859. His son was killed by an explosion at Powder House Spring below the cave. This is an exceptionally large cave and evidence of mining extends far from the entrance. The leaching vats were located in a large room near the entrance, but this room is damp and the wooden vats have deteriorated to the point that they are difficult to recognize.[8]

During the 1930s, as part of the New Deal, the federal government's Subsistence Homesteads Division established the Cumberland Homesteads outside of Crossville. The program provided land and houses for 250 impoverished families. Cumberland Mountain State Park was built as part of this project.[6]

The county is home to a number of karst formations, most notably at Grassy Cove, a large, closed depression located southeast of Crossville. It is 3 miles wide, 5 miles long, and over 1,000 feet deep. All of the water draining into Grassy Cove flows underground through a large cave system and emerges 4 miles southwest at the head of the Sequatchie Valley to form the Sequatchie River. 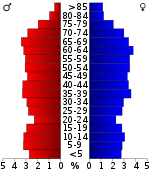 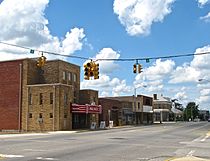 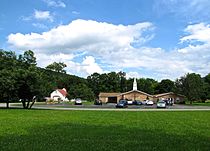 Like all of East Tennessee, Cumberland County is powerfully Republican, and has generally been favorable to that party ever since the Civil War. Five Democratic presidential candidates have won the county since then, but none have reached 52 percent of the county's ballots.

Retrieved from "http://en.turkcewiki.org/w/index.php?title=Cumberland_County,_Tennessee&oldid=1082363302"
This website is a mirror of Wikipedia, and is not affiliated with the Wikimedia Foundation.
Categories:
Hidden categories: