Jump to content
Farm building
This article is about the granary used to dry and store corn. For the stadium in Normal, Illinois, see The Corn Crib. 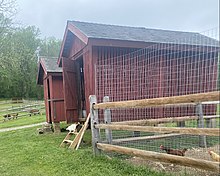 A corn crib or corncrib is a type of granary used to dry and store corn. It may also be known as a cornhouse or corn house.[1]

After the harvest and while still on the cob, corn is placed in the crib either with or without the husk. The typical corn crib has slats in its walls to allow air to circulate through the corn, both allowing it to dry initially and helping it stay dry. The slats expose the corn to pests, so corn cribs are elevated beyond the reach of rodents.

Although granaries had been used around the world in many cultures who grew grain for food,[2] corn cribs were first used by Native Americans and then quickly adopted by European settlers. Struggling European settlers often raided corn cribs for food. As a result, at least some Native groups abandoned the corn crib and buried food in caches.[3]

Corn crib designs vary greatly. They were originally made of wood, but other materials such as concrete have also been used. The basic corn crib consists of a roofed bin elevated on posts. Another typical early American design has walls slanted outward. Most of the larger designs have an open space in the middle for accessing corn and promoting airflow. In larger designs, this space was often used to store wagons. By the early 20th century, the term "corn crib" was applied to large barns that contained many individual bins of corn.[4] Today a typical corn crib on many farms is a cylindrical cage of galvanized wire fencing covered by a metal roof formed of corrugated galvanised iron.

Wikimedia Commons has media related to Corn cribs.
Retrieved from "http://en.turkcewiki.org/w/index.php?title=Corn_crib&oldid=1102565610"
This website is a mirror of Wikipedia, and is not affiliated with the Wikimedia Foundation.
Categories:
Hidden categories: