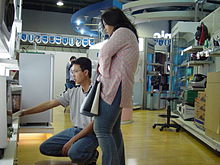 Consumption of household is the use of goods and services, this is not to be confused with consumption expenditure or consumer spending. Those describe the amount of money that is spent on goods and services. In those durable goods and other similar expenses are counted differently [4] [5]

More recent theoretical approaches are based on behavioural economics and suggest that a number of behavioural principles can be taken as microeconomic foundations for a behaviourally-based aggregate consumption function.[6]

Behavioural economics also adopts and explains several human behavioural traits within the constraint of the standard economic model. These can range from: bounded rationality bounded willpower, and bounded selfishness.[7]

Bounded rationality was first proposed by Herbert Simon. This means that people sometimes respond rationally to their own cognitive limits, which aimed to minimize the sum of the costs of decision making and the costs of error. In addition, Bounded willpower refers to the fact that people often take actions that they know are in conflict with their long-term interests. For example, most smokers would rather not smoke, and many smokers willing to pay for a drug or a program to help them quit. Finally, bounded self-interest refers to an essential fact about the utility function of a large part of people: under certain circumstances, they care about others or act as if they care about others, even strangers.[8]

Aggregate consumption is a component of aggregate demand.[9]

Consumption is defined in part by comparison to production. In the tradition of the Columbia School of Household Economics, also known as the New Home Economics, commercial consumption has to be analyzed in the context of household production. The opportunity cost of time affects the cost of home-produced substitutes and therefore demand for commercial goods and services.[10][11] The elasticity of demand for consumption goods is also a function of who performs chores in households and how their spouses compensate them for opportunity costs of home production.[12]

Consumption can also be measured in a variety of different ways such as energy in energy economics metrics.

Consumption as part of GDP[edit]

GDP (Gross domestic product) is defined via this formula: [14]

stands for net exports. Net exports are exports minus imports.

In most countries consumption is the most important part of GDP it ranges usually ranges from 45% from GDP to 85% of GDP. [15][16]

In microeconomics, consumer choice is a theory that assumes that people are rational consumers. And they decide on what combinations of goods to buy based on their utility function (which goods provide them with more use/happiness) and their budget constraint (which combinations of goods they can afford to buy). [17] Consumers try to maximize utility while staying within the limits of their budget constrain. Or to minimalize cost while getting the target level of utility. [18]A special case of this is the consumption-leisure model where a consumer chooses between a combination of leisure and working time, which is represented by income. [19]

But based on behavioural economics consumers do not behave rationally and they are influenced by other factors than their utility from the given good. Those factors can be the popularity of given good or its position in a supermarket.[20][21]

In macroeconomics in the theory of national accounts consumption is not only the amount of money that is spent by households on goods and services from companies. But also the expenditures of government that are meant to provide things for citizens they would have to buy themselves otherwise. This means things like healthcare.[22] Where consumption is equal to income minus savings. Consumption can be calculated via this formula: [23]

is marginal propensity to consume where

and it tells us how much of household income is spend on consumption.

is the income the household receives.

Consumption as a measurement of growth[edit]

The main factors affecting consumption studied by economists include:

Consumer expectations: Changes in the prices would change the real income and purchasing power of the consumer. If the consumer's expectations about future prices change, it can change his consumption decisions in the present period.

Consumer assets and wealth: These refer to assets in the form of cash, bank deposits, securities, as well as physical assets such as stocks of durable goods or real estate such as houses, land, etc. These factors can affect consumption; if the mentioned assets are sufficiently liquid, they will remain in reserve and can be used in emergencies.

Consumer credits: The increase in the consumer's credit and his credit transactions can allow the consumer to use his future income at present. As a result, it can lead to more consumption expenditure compared to the case that the only purchasing power is current income.

Consumer taste: One of the important factors in shaping the consumption pattern is consumer taste. This factor, to some extent, can affect other factors such as income and price levels. On the other hand, society's culture has a significant impact on shaping the tastes of consumers.

Consumption theories began with John Maynard Keynes in 1936 and were developed by economists such as Friedman, Dusenbery, and Modigliani. The relationship between consumption and income was a crucial concept in macroeconomic analysis for a long time.

In his 1936 General Theory,[28] Keynes introduced the consumption function. He believed that various factors influence consumption decisions; But in the short run, the most important factor is real income. According to the Absolute Income Hypothesis, consumer spending on consumption goods and services is a linear function of his current disposable income.

James Dusenbery proposed this model in 1949.[29] This theory is based on two assumptions: 1- People's consumption behavior is not independent of each other. In other words, two people with the same income that live in two different positions within the income distribution will have different consumptions. In fact, one compares oneself with other people, and what has a significant impact on one's consumption is one's position among individuals and groups in society; Therefore, a person only feels an improvement in his situation in terms of consumption if his average consumption increases relative to the average level of society. This phenomenon is called the Demonstration Effect. 2- Consumer behavior over time is irreversible. This means that when income declines, consumer spending is sticky to the former level. After getting used to a level of consumption, a person shows resistance to reducing it and is unwilling to reduce that level of consumption. This phenomenon is called the ratchet effect.

The model of intertemporal consumption was first thought of by John Rae in 1830s and it was later expanded by Irving Fisher in 1930s in the book Theory of interest. This model describes how consumption is distributed over periods of life. In the basic model with 2 periods for example young and old age.

is the consumption in a given year.

is the income received in a given year.

are saving from a given year.

is the interest rate.

This model can be expanded to represent each year of a lifetime.[30]

Is a economical theory developed by Milton Friedman in 1950s in his book A theory of Consumption Function. This theory divides income into two components

is transitory income and

is permanent income. Where

Based on changes of income consumption changes as well, but in this theory, it meters which component of income changes. If

changes then consumption changes accordingly by

is marginal propensity to consume. (If we expect part of income to be saved or invested otherwise

changes (for example winning lottery). Then this increase in income is distributed over the remaining life span. For example, winning $1000 with the expectation of living for 10 more years. Will result in yearly increase of consumption by $100 [30]

Is a hypothesis by Franco Modigliani that was published in the 1950s. It describes that people make consumption decisions based on their current and future and past income. As people tend to distribute their consumption over their lifetime. Where in the basic form : [31]

is the consumption in given year.

is the number of years the individual is going to live for.

is for how many more years will the individual be working.

is the wealth he has already accumulated in his life. [32]

Spending the Kids' Inheritance (originally the title of a book on the subject by Annie Hulley) and the acronyms SKI and SKI'ing refer to the growing number of older people in Western society spending their money on travel, cars and property, in contrast to previous generations who tended to leave that money to their children. According to a study from 2017 that was conducted in the USA 20% of married people consider leaving inheritance a priority, while 34% do not consider it as a priority. And about one in ten unmarried Americans (14 percent) plan to spend their retirement money to improve their lives, rather than saving it to leave an inheritance to their children. In addition, three in ten married Americans (28 percent) have downsized or plan to downsize their home after retirement. [33]

Die Broke (from the book Die Broke: A Radical Four-Part Financial Plan by Stephen Pollan and Mark Levine) is a similar idea.

Retrieved from "http://en.turkcewiki.org/w/index.php?title=Consumption_(economics)&oldid=1020279710"
This website is a mirror of Wikipedia, and is not affiliated with the Wikimedia Foundation.
Categories:
Hidden categories: