Jump to content
Greenhouse for the public display of plants 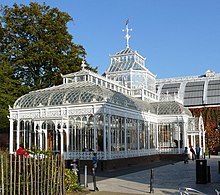 A traditional conservatory at the Horniman Museum in London, now used as a cafe.

Scotland, 2015. This is what is usually meant by a "conservatory" in the UK; there are no plants in this one. 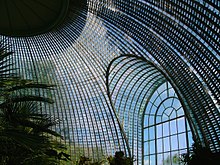 A conservatory is a building or room having glass or other transparent roofing and walls used as a greenhouse or a sunroom. Usually it refers to a space attached to a conventional building such as a house, especially in the United Kingdom. Elsewhere, especially in America, it can often refer to a large free-standing glass-walled building in a botanic garden or park, sometimes also called a palm house if tall enough for trees. Municipal conservatories became popular in the early 19th century.

Many cities, especially those in cold climates and with large European populations, have built municipal conservatories to display tropical plants and hold flower displays. This type of conservatory was popular in the early nineteenth century, and by the end of the century people were also giving them a social use (e.g., tea parties). Conservatory architecture varies from typical Victorian glasshouses to modern styles, such as geodesic domes. Many were large and impressive structures and are included in the list below.

In the UK the legal definition of a conservatory is a building that has at least 50% of its side wall area glazed and at least 75% of its roof glazed with translucent materials, either polycarbonate sheeting or glass. Today, the terms sunroom, solarium and conservatory are used interchangeably by the public, but in general the term conservatory and particularly English conservatory evoke the image of an ornate structure, echoing the traditions of that Victorian era of conservatory building. Modern conservatories tend also to be graced with a traditional cresting and finial, along with single, double patio or even bi-folding doors.

These structures have been designed and built around the world, in private gardens, parks, and botanical institutions. Smaller garden conservatories have become popular, which may be dual-function, equally devoted to horticulture and recreation, or favor the latter, as a solarium or sunroom. 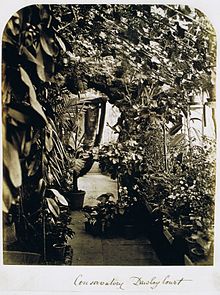 An English conservatory, Dawley Court, near Hillingdon, Middlesex, photographed circa 1870

Conservatories originated in the 16th century when wealthy landowners sought to cultivate citrus fruits such as lemons and oranges that began to appear on their dinner tables brought by traders from warmer regions of the Mediterranean. Preservation of citrus and other tender plants started out as crudely as building a pergola over potted plants or beds or simply moving potted plants indoors for the cold season. Known in Italy as limonaia, these early structures employed wood panels or open galleries to protect from the cold.

Further north in Europe, the preservation of orange trees became the trend with special-purpose buildings built to protect the tasty, but delicate fruit. Orangeries, as they came to be called were typically enclosed structures built with wood, brick or stone with tall vertical windows on the south walls. The citrus trees were typically in huge pots or tubs, and wheeled outside for the summer months, as at the Gardens of Versailles. Use of these rooms expanded socially and practically, being used to entertain and to host a wider variety of plants. The term greenhouse came to describe the rooms and conservatories for tender plants. In the 18th century a Dutch scientist pioneered the use of sloping glass to bring in more light for the plants than the tall, glass side walls of orangeries.[citation needed]

The 19th century was the golden age of conservatory building, primarily in England. English conservatories were the product of English love of gardening and new technology in glass and heating technology. Many of the magnificent public conservatories, built of iron and glass, are the result of this era. Kew Gardens in London is an example of a large greenhouse used for growing tender and rare plants, or, less often, for birds and rare animals – sometimes with the plants and animals living together. Other examples include the Great Palm House at Kew Gardens that was built in 1844, built by Decimus Burton and the Crystal Palace, built for London's Great Exhibition of 1851 by Sir Joseph Paxton.[1]

The widespread construction of UK conservatories came to a halt with the onset of World War II. While the advent of insulated glass in the 1950s and 1960s saw the development of simple sunroom structures, it was not until the 1970s that creative architects and builders began to recreate the Victorian styling of 19th-century English conservatories in smaller domestic versions using insulated glass. In contemporary construction, a conservatory differs from an orangery in having more than 75% of its roof surface made from glass. Frame and roof materials include aluminium, PVCu and timber. A conservatory by definition must have more than 50% of its wall surface glazed. Contemporary conservatories use a number of technologies to ensure glass is as energy efficient as possible, ensuring it lets in the maximum light possible while maintaining a steady temperature throughout summer and winter. Technologies include argon-impregnated glass, easy clean coatings, heat reflective film, thermal ribbons or thermal breaks – hollow sections of glass that intercept heat.[2][3] The latest glass technologies involve self-tinting glass that darkens as heat builds up during a summer's day and then lightens as the surface temperature of the glass cools later in the day.

Wikimedia Commons has media related to Botanical conservatories and Greenhouses.
Retrieved from "http://en.turkcewiki.org/w/index.php?title=Conservatory_(greenhouse)&oldid=1123543000"
This website is a mirror of Wikipedia, and is not affiliated with the Wikimedia Foundation.
Categories:
Hidden categories: