(Redirected from Closing ceremony)
Jump to navigation Jump to search
Official opening of a building or event
This article is about the formal beginning of a major sports event. For the American luxury streetwear brand, see Opening Ceremony (brand).

An opening ceremony, grand opening, or ribbon-cutting ceremony marks the official opening of a newly-constructed location or the start of an event.[1] Opening ceremonies at large events such as the Olympic Games, FIFA World Cup, and the Rugby World Cup might involve thousands of participants and be watched worldwide. Such tournaments often also include a closing ceremony at the end of the event.[2] 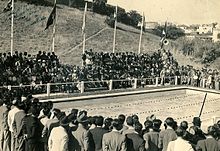 Grand opening of a swimming pool, 1941

In the case of physical establishments, its grand opening might be preceded by a "soft opening" or "soft launch" in which the establishment begins to operate with little promotion, to allow testing of operations, procedures, and facilities.

Retrieved from "http://en.turkcewiki.org/w/index.php?title=Opening_ceremony&oldid=1086424704"
This website is a mirror of Wikipedia, and is not affiliated with the Wikimedia Foundation.
Categories:
Hidden categories: