Clingmans Dome (or Clingman's Dome) is a mountain in the Great Smoky Mountains of Tennessee and North Carolina in the southeastern United States. Its name in Cherokee is Kuwahi or ᎫᏩᎯ, meaning "mulberry place." At an elevation of 6,643 feet (2,025 m), it is the highest mountain in the Great Smoky Mountains National Park, the highest point in the state of Tennessee, and the highest point along the 2,192-mile (3,528 km) Appalachian Trail. It is also the third highest point in mainland Eastern North America, after Mount Mitchell (6,684 feet or 2,037 metres) and Mount Craig (6,647 feet or 2,026 metres).

Clingmans Dome has two subpeaks: 6,560-foot (2,000 m) Mount Buckley to the west and 6,400-foot (1,950 m) Mount Love to the east. The headwaters of several substantial streams are located on the slopes of Clingmans Dome, namely Little River on the north slope, and Forney Creek and Noland Creek (both tributaries of the Tuckasegee River) on the south slope. The mountain is located entirely within the watershed of the Tennessee River.[4]

Clingmans Dome is protected as part of the Great Smoky Mountains National Park. A paved road connects it to U.S. Highway 441 at Newfound Gap 6.7 miles (10.8 km) away.[5] The 45-foot (14 m) concrete observation tower, built in 1959 and listed on the National Register of Historic Places, offers a panoramic view of the mountains. An air quality monitoring station, operated by the Environmental Protection Agency, is the second highest in eastern North America.

The Southern Appalachian spruce-fir forest which covers Clingmans Dome occurs only at the highest elevations in the southeastern United States, and has more in common with forests at northern latitudes than with the forests in the adjacent valleys. Clingmans Dome stands prominently above the surrounding terrain, rising nearly 5,000 feet (1,500 m) from base to summit. The forest on and around Clingmans Dome has experienced a large die-off of Fraser fir caused by the non-native insect, balsam woolly adelgid.[4]

Built in 1959, the 45-foot (14 m) concrete observation tower features a circular observation platform accessed by a spiral ramp. The ramp is 375 feet (114 m) in length, and rises at a 12 percent grade, in synch with the Clingmans Dome Trail. The platform, 28 feet (8.5 m) in diameter, allows spectators a 360-degree panorama of the surrounding terrain.[7] Cantilevered signs point out the various peaks, ridges, cities, and other features visible in the distance. Depending on the haze, visibility ranges from 20 miles (32 km) on hazy days to 100 miles (160 km) on very clear days.[6]

The tower was one of nine observation towers constructed as part of the Mission 66 program (1955–1966), an effort by the National Park Service to upgrade its facilities to accommodate an influx of visitors to national parks during the post-World War II era. Designed by Hubert Bebb of the Gatlinburg-based architecture firm Bebb and Olson, the tower's modern design, especially the use of concrete as the primary building material, marked a departure from previous park structures, which favored more rustic elements. Though some criticized the Clingmans Dome tower as too "urban," two other park service observation towers— the nearby Look Rock tower along Foothills Parkway and the Shark Valley tower at Everglades National Park— were built using similar designs.[6]

Bebb's original design consisted of a massive stone tower topped by a circular platform and fire observation cab, and accessed by a concrete ramp. Fred Arnold, head of the park service's Forest and Wildlife Protection branch, rejected the inclusion of the fire observation cab, arguing that while Clingmans Dome was the highest point in the park, it wasn't particularly useful for fire detection purposes. Park service director Conrad Wirth objected to the use of a ramp, favoring instead a spiral staircase. After John B. Cabot, head of the park service's Eastern Office of Design and Construction, convinced him of the ramp's usefulness, Wirth decided the stone tower would not be necessary, stating a single central support column would suffice.[6] 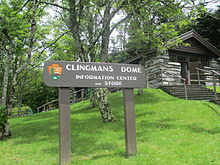 Clingmans Dome is the most accessible mountain top in the Great Smoky Mountains National Park. The 7-mile (11 km) Clingmans Dome Road, which is open annually from April 1 through November 30,[4] begins just past Newfound Gap and leads up the mountain to the Forney Ridge Parking Area, 330 feet (100 m) below the summit. A 1⁄2 mile (0.80 km) paved trail leads from the parking lot to the 45-foot (14 m) observation tower at the top of the mountain.[10] The short, steep trail provides a small visitor information center and park store staffed by the Great Smoky Mountains Association, garbage cans, and numerous benches to the side of the path. Vault toilet restrooms are available. The trail offers a glimpse of the often hostile environment of highland Appalachia, passing through the spruce-fir forest and its accompanying blowdowns and dead Fraser Firs.

The Appalachian Trail (A.T.) crosses Clingmans Dome, passing immediately north of the observation tower. A 7.5-mile (12.1 km) leg of the trail connects the mountain with Newfound Gap, and provides the only access to the mountain in winter months. The nearest A.T. backcountry shelters are the Double Spring Gap Shelter, which is 2.6 miles (4.2 km) to the west near the Goshen Prong junction, and the Mount Collins shelter, which is 4 miles (6.4 km) to the east near the A.T.'s junction with the Sugarland Mountain Trail. Clingmans Dome is the upper terminus for several additional hiking trails, including the Forney Ridge Trail (to Andrews Bald) and the Forney Creek Trail (to the Benton MacKaye Trail on the shores of Fontana Lake).

The western terminus of the Mountains-to-Sea Trail, which connects the Smokies to the Outer Banks of North Carolina, is located atop Clingmans Dome. It follows the Appalachian Trail for 3.8 miles (6.1 km) to the east, where it then begins to descend toward the Blue Ridge Parkway, via the Fork Ridge Trail.

The Cherokee name for Clingmans Dome was Kuwahi (ᎫᏩᎯ), or "mulberry place." According to a Cherokee myth recorded by ethnologist James Mooney in the late 19th century, the mountain was the home of the White Bear, the great chief of all bears, and the location of one of the bears' councilhouses. The enchanted lake of Ataga'hi ("Gall Place"), the waters of which could cure wounded bears, was believed by the Cherokee to be located somewhere between Clingmans Dome and the headwaters of the Oconaluftee River to the east.[11]

In 1789, an act passed by the North Carolina legislature ceded what is now Tennessee to the federal government. This act fixed a portion of the boundary between the two along the crest of the "Great Iron or Smoky Mountains," which would have included the mountain now known as Clingmans Dome.[12]

The mountain was dubbed "Smoky Dome" by American settlers moving in from other areas. In 1859, the mountain was renamed by Arnold Guyot for compatriot Thomas Lanier Clingman[13] (1812–1897), a Confederate general of the American Civil War who explored the area extensively in the 1850s and then spent many years promoting it. Guyot named the mountain for Clingman because of an argument between Clingman and a professor at the University of North Carolina, Elisha Mitchell, over which mountain was actually the highest in the region. Mitchell contended that a peak by the name of Black Dome (now known as Mount Mitchell) was the highest, while Clingman asserted that Smoky Dome was the true highest peak. Guyot determined that Black Dome was 39 feet (12 m) higher than Smoky Dome.

In the early morning hours of June 12, 1946, a Boeing B-29 Superfortress crashed near the summit of Clingmans Dome, killing all twelve aboard.[14]

Clingmans Dome is part of a geological formation known as the Copperhill Formation. It consists predominately of massive, coarse-grained metagreywacke and metaconglomerate. The Lower northern flanks of Clingmans Dome are underlain by thick layers of sulfidic, quartz-garnet-muscovite phyllite and schist, which occur within the metagraywackes and metaconglomerates. Adjacent to and south of its summit, thin, southward-dipping, and discontinuous beds of garnetiferous, locally graphitic and sulfidic, metasiltstone occur within the Copperhill Formation.[15]

The Copperhill Formation is part of the greater Ocoee Supergroup, a body of clastic metasedimentary rocks formed 560 million years ago. They unconformably lie upon Precambrian granitic and gneissic rocks. The sediments that originally comprised the Ocoee Supergroup accumulated in a string of narrow, deep-water basins that stretched along the entire southern-central Appalachian margin from Tennessee, North Carolina, to Georgia. These basins were rift basins formed by the rifting of Rodinia.[16][17]

The initial metamorphism of the Ocoee Supergroup occurred about 400 million years ago as the result of Ordovician-Silurian tectonism during the Taconic orogeny. Later, Devonian-Mississippian metamorphism of these strata occurred during the Acadian orogeny and additional Pennsylvanian to Permian alteration by retrograde metamorphism and deformation occurred during the Alleghanian orogeny. During the latest part of this orogeny, this segment of the Appalachian Mountains was formed by thrust faulting and folding that uplifted these strata as a series of complexly deformed thrust sheets. During the Mesozoic and Cenozoic, the gradual uplift and erosion of this part of the Appalachian Mountains has continued.[15][16][17]

Although a dense forest understory covers most of the mountain, outcroppings of the Copperhill Formation can be found on Clingmans Dome at the Forney Ridge Parking Lot at the end of Clingmans Dome Road. This outcrop exposes massive metaconglomerate of the Copperhill Formation. At this outcrop, it consists of massive 6-metre (20 ft) thick beds of micaceous quartzite. It contains coarse pebbles of quartz and feldspar, flat pebbles of fine-grained black graywacke, and egg-shaped concretions up to 30 centimetres (12 in) in diameter. These cobble-size concretions are readily eroded by weathering to leave rust-stained depressions or cavities in the metaconglomerate.[18]

Soils of Clingmans Dome are mostly moderately deep to shallow, well drained dark brown loam or sandy loam of strong to extreme acidity; Breakneck and Pullback series are most common.[19]

The climate of Clingmans Dome is hemiboreal (Köppen Dfb, Trewartha Dcb[20]). As with much of the southern Blue Ridge, the area qualifies as part of the Appalachian Rainforest.[21]

Retrieved from "http://en.turkcewiki.org/w/index.php?title=Clingmans_Dome&oldid=1063968747"
This website is a mirror of Wikipedia, and is not affiliated with the Wikimedia Foundation.
Categories:
Hidden categories: