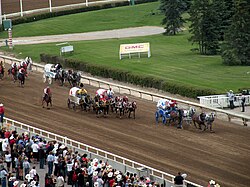 Chuckwagons racing toward the finish line at the 2009 Calgary Stampede

Chuckwagon racing is an equestrian rodeo sport in which drivers in a chuckwagon led by a team of Thoroughbred horses race around a track. The sport is most popular in the Prairie Provinces of Canada, where the World Professional Chuckwagon Association and the Canadian Professional Chuckwagon Association are the two major racing circuits. The most famous chuckwagon race in the world is held annually at the Calgary Stampede, where the total prize money for the ten-day event tops C$2 million. The WPCA submits 25 drivers to the Calgary, while the CPCA submits 11 drivers. The sport is controversial, as horses and drivers have been injured or died, prompting animal welfare groups to call for it to be banned.

Each chuckwagon racing team is led by a driver, who commands a team of horses pulling the chuckwagon. The driver is supported by two or four outriders, each racing individual thoroughbred horses that follow the chuckwagon. Each race typically involves three or four teams, and begins with the outriders "breaking camp", by tossing two tent poles (with four outriders only) and a barrel representing a camp stove into the back of their wagon before mounting their horses and following the wagons as they complete a figure eight around two barrels before circling a race track. The first wagon to cross the finish line typically wins, although various time penalties are handed out for infractions such as a barrel being knocked over, a tent pole or stove not loaded, wagon interference, or an outrider crossing the finish line too far behind his wagon driver.[1]

The first time chuckwagon races were held as a spectator sport was at the 1923 Calgary Stampede.[2][3] Guy Weadick, who had founded the Stampede eleven years previously, invited ranchers to enter their chuckwagons and crews to compete for a total of $275 in prize money.[4] In 2009, the total purse available to racers was $1.15 million. Drivers can earn additional awards:[5]

The actual origin of the sport is unknown, with many different stories offered. Among them are the suggestions that Weadick first saw a similar event at the 1922 Gleichen Stampede, that he saw impromptu races between chuckwagon drivers as a kid growing up, or that cooks from two chuckwagons who had completed serving a barbecue at the 1919 Victory Stampede in Calgary then raced to the grandstand's exit, inspiring the event.[6] 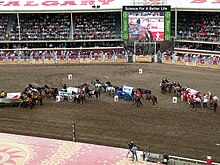 Wagons lined up before the start of a race

While the sport's popularity is greatest on the Canadian prairies, chuckwagon racing has been held in conjunction with many rodeos across North America.

The sport can be very dangerous for wagon drivers and outriders. There have been five human deaths related to the Rangeland Derby at the Calgary Stampede. Three occurred between 1948 and 1971, one of which was a spectator struck by an outrider's horse, and two occurred in the 1990s; an outrider in 1996 and a driver in 1999.[9]

The sport has faced opposition from animal welfare groups, who contend that it is unnecessarily cruel to the horses (which occasionally suffer injuries requiring them to be euthanized), and want the sport banned.[10] For instance, four horses died following chuckwagon races at the 2009 Calgary Stampede,[11] and a wagon crash during the 2007 Stampede in which three horses died and a driver hospitalized led officials in Calgary to review the safety of the sport.[12] Six horses died in 2010, two from heart attacks.[13] Approximately 65 horses have died in chuckwagon races at that event between 1986 and 2015.[14] In 2013, a 12-year-old thoroughbred ridden by an outrider collapsed with a burst lung artery and died shortly afterwards, a death attributed to exercise-induced pulmonary hemorrhage.[15] Four horses were euthanized after suffering leg injuries in races at the 2015 Stampede.[14]

Supporters of the event argue that the horses are well cared for, before and after the race itself. At the Calgary Stampede, officials work closely with local Society for the Prevention of Cruelty to Animals and Calgary Humane Society staff to ensure that the horses are fit enough to endure the race.[10] Wagon drivers express sadness over the periodic deaths of horses at the Stampede, explaining that, while unfortunate, animal injury and death are a normal element of any ranch or farming operation. Critics counter that chuckwagon racing is simply an adrenaline sport and produces no food. Thus the practice is an unnecessary and cruel risk to force horses to take.[10]

Retrieved from "http://en.turkcewiki.org/w/index.php?title=Chuckwagon_racing&oldid=1084606254"
This website is a mirror of Wikipedia, and is not affiliated with the Wikimedia Foundation.
Categories:
Hidden categories: